The first Test in Adelaide was a near perfect advertisement for Test cricket. It really had it all, from frustrating showers and helmet-crunching bouncers to sledging, emotional centuries, record-breaking batting feats and twelve-wicket hauls. A lot can happen in five days and near forty degree heat. Following the tragic death of Phillip Hughes, that had many pondering the future of a game already attempting to overcome so many problems, Adelaide’s remarkable fixture should bring hope and redemption to all. And indeed, with the future a talking point, Adelaide provided a most interesting glimpse into the prospective destinies of two potentially riveting cricket sides. Australia
Despite four centuries distributed between three batsmen and twelve wickets for spinner Nathan Lyon, the hosts will feel relieved to emerge 48-run winners in Adelaide. India – or more accurately, Virat Kohli – were on course for a miraculous final day chase before a batting meltdown brought about their demise. Credit where it is due, Lyon was immaculate in utilising the rough and making the new batsmen uncomfortable, and a tremendous amount of work had been done prior by the batting line-up. Indeed, up until the final day blitz, Australia were well on top throughout.

David Warner’s amazing run of form looks in no danger of being cut short. Centuries in both innings now sees the opener with 1061 runs from seven 2014 Test matches, recording six hundreds and three fifties in fourteen innings. Only Younis Khan has as many centuries in Test cricket this year but has played six more innings and scored one less fifty. Khan, Sangakkara and Angelo Mathews have more runs, but all have played more cricket than Warner. However, his opening partner Chris Rogers is short of runs. Shane Watson has been struggling a bit at three and at number four, Michael Clarke, a miraculous century against the odds in Adelaide a familiar parting shot, is out of cricket indefinitely with multiple injuries.

The incredibly capable Steven Smith has been announced as the long-term choice to replace Clarke as captain. Smith recorded his highest score in Adelaide, 162 not out, while Mitchell Marsh proved useful at number six. Shaun Marsh looks set to replace Clarke for Brisbane. It can be said that Adelaide provided a useful glimpse into the potential of an Australian side without Clarke, although much cricket has been played without him in recent times. Somehow, the time seems ripe for Smith to take over. Adelaide seemed almost a coming-of-age for Australia’s next bright star. 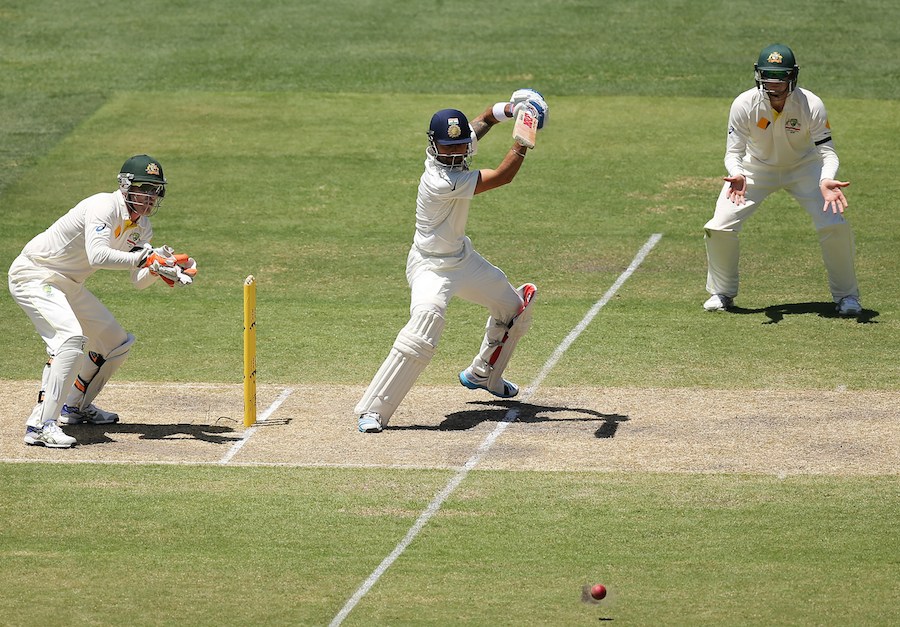 In the same breath, Virat Kohli’s appointment as temporary captain in the absence of MS Dhoni provided insight into an Indian future full of promise. Rarely have they come so close to victory in Australia in recent times, their last win Down Under back in 2007/08. Kohli almost mirrors Michael Clarke in his style of leadership. He is full of intensity, aggression, he leads from the front and is not afraid to voice his displeasure. Dhoni has looked weary and has lacked tactical awareness for some time. The way that Kohli never once was intent of settling for a draw ushers in a new wave of Indian cricketers that are more cutthroat than ever. Dhoni still seems the correct choice for wicket-keeper batsman but it is about time that India consider shifting the weight of captaincy to the capable Kohli. No batsmen has ever made as many runs on his captaincy debut; 256 of them to be exact.

Kohli’s biggest mistake was being integral in selecting Karn Sharma for the first Test ahead of Ravi Ashwin. Sharma picked up a few lucky wickets but was far too expensive and didn’t have nearly the control necessary. A legspinner is always a gamble but considering Imran Tahir’s pounding in Australia, India should have been far more circumspect to play a man with a meagre first-class record. I expect Ashwin to make a return for Brisbane, simultaneously plugging a hole in India’s lower order. Despite losing their final eight wickets for less than a hundred runs, and in turn the match, India can be proud of their first Test performance. One area that can definitely be scrutinzed in the fielding. Dropping Steve Smith four times (including a missed stumping) is simply criminal and the extra forty or so runs he compiled proved to be the difference.

Venue
The Gabba will provide a bit more for the quicks, Adelaide being a batsman’s paradise up until the fifth day. India found themselves lucky that there was no exceptional movement through the air or off of the pitch in the first Test, at least not consistently. I have a feeling that Brisbane will provide a sterner examination of India’s batting order against pace and bounce. A green, green wicket is expected. There are chance of showers, particularly on day two, but there should be result here.

VERDICT: Australia 6/10
A bouncy Gabba wicket and a fiery Australian attack should put pay to India’s lofty ambitions. Although the attack of Johnson, Siddle and Harris looked a bit jaded in the first Test, Australia have ample and capable replacements in the pace department. I feel Johnson could shine here. Figures of 9/103 against England last year ended Jonathan Trott’s career.