The West Indies will play the first Test of a three-match series against Australia in Hobart on Thursday morning. After all of the hype surrounding the recent Trans-Tasman series between Australia and New Zealand, there’s an air of inevitability about the result of upcoming game after the Islanders succumbed to a ten-wicket defeat to a massively inexperienced  Cricket Australia XI. Australia
The Aussies will come into this match full of confidence after their recent 2-0 series win against their Trans-Tasman neighbours, New Zealand. The final match of that series – a three-wicket win – came in the first ever day/night Test match in which the pink ball came under some scrutiny after a botched DRS decision went against the Black Caps. We’ll leave the controversy there for now and continue to look forward to the first match of this series.

The hosts’ top order will be licking their lips at the prospect of facing a bowling attack that lacks any real consistency. The likes of Dave Warner, Adam Voges, Joe Burns and Steve Smith were all in sensational form in the last series will look to continue their fine summer with big scores against the islanders. If Jason Holder and his bowlers don’t settle quickly, hitting the right lines and lengths, they could well be in for an absolute hammering.

Warner is likely to be at his belligerent best when he strides out into the middle with Burns to open the batting. If he gets going, he could knock the wind out of the West Indies attack, effectively taking the game away from the visitors in two or three sessions. Typically, the diminutive Australian will give you a chance early on if he’s looking to attack, whether the chance is presented and the Windies can take it could well prove decisive.

Peter Siddle will want to continue his Test revival after he was recalled to the team following the retirement of Mitchell Johnson.  The Victoria-born quick toiled hard in difficult conditions, claiming two wickets in the first innings of the third Test aganist New Zealand. The fiery bowler has happy memories of Bellerive Oval. The last time he played here he picked up nine wickets against Sri Lanka, leading his team to a 137 victory. He will very much be the supporting act come Thursday though, with the likes of Josh Hazlewood, Nathan Coulter-Nile and Mitch Marsh leading the attack.

All of the Australian pacers will be looking forward to bowling at the Bellerive Oval. Images coming out on Monday show a green deck, almost indiscernible from the rest of the field. Warm weather in Hobart in the lead up to the start of play will likely dry the surface up somewhat. If they can hit their straps, they will cause all sorts of problems for a West Indies batting line-up that is really struggling for form.

There may well be some assistance for Nathan Lyon later on in the match once the pitch dries out a bit. The Aussie off-spinner enjoys bowling here at Test level, putting in a solid shift is his last match here against Sri Lanka in which he took two wickets and returned a supremely good economy rate 2.02. West Indies
The West Indies face a myriad of problems heading into this first Test: the green deck at Hobart, a woefully out of form top order and a crushing 10-wicket defeat to a Cricket Australia XI that featured six players making their first-class debuts. In a truly awful performance, the only real positive that the tourists can take away from the game is the form of their captain, Jason Holder.

The giant from Barbados was the pick of the West Indies’ bowlers in an otherwise dire performance that saw the invitational side score 444 in their first innings at more than 4 runs an over. Holder managed to four wickets while returning an economy rate of 3.45. His heroics would continue in the West Indies’ second innings as he combined with Kemar Roach to put on 79-run eighth-wicket partnership, sparing the West Indies the ignominy of an innings defeat.

The West Indies top order face an uphill battle in this series. Whether or not the selectors will give Rajandra Chandrika a second Test cap remains to be seen. The 26-year-old’s only previous Test appearance came against a rampant Australian side in Kingston where he was dismissed for a pair. Shai Hope is likely to open with Kraigg Brathwaite in the first Test with Darren Bravo and Marlon Samuels coming in at three and four. At least two of these guys are going to need to fire if the West Indies are to have any chance of winning, or even drawing this match.

One feels that these guys simply don’t have the temperament for Test cricket though. Take Marlon Samuels for instance, a fine batsman with a decent record. How many times has he got starts against some of the best teams in the world before throwing his wicket away having a slog? A change in approach is needed or one feels that West Indian cricket will continue on its current downward trend.

If the Windies are to cause an upset here, it’ll be their bowlers that perform the heroics. In Roach, Holder and Jerome Taylor; the West Indies have an attack that is capable of causing even the best batsmen in the world problems, especially on a green Australian wicket. Steve Smith and his men will just have to cast their minds back to Taylor’s ferocious spells in Jamaica earlier in the year in which he took six wickets in the Australian’s first innings. 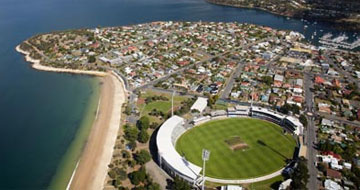 Venue
The first Test is due to be played at the scenic Bellerive Oval in Hobart. A relatively small ground by Australian standards, the stadium seats around 16 000 supporters. The last Test was played here in December 2012 when Australia beat Sri Lanka by 137 runs.

The wicket looks green as anything at the moment, however, it should dry up, eliminating a lot of the moisture in the deck as we get closer to the start of play and we can expect some fiery spells of fast bowling from two venomous attacks. The weather shouldn’t have too much a bearing on the game with very light showers expected to fall late on Friday evening. Otherwise, conditions should be pretty bearable for the players, who will only have to deal with temperatures in the mid to high twenties.

Verdict: Jason Holder Top West Indies First Innings Batsman 12/1
Australia will win this Test match – no doubt about it. However, at 1/8 it’s really not worth the punt. Instead, I’ve decided to stick my neck out here and back Jason Holder to top score for the visitors in their first innings. If the customary West Indies top order collapse does materialise, expect Holder to come in and play a calm, measured innings; giving his side’s total a bit of respectability.