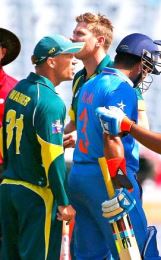 The slightly controversial Carlton Mid ODI Tri-Series rumbles on, providing the perfect World Cup warm-up for cricket’s financial Big Three. Australia have recorded wins over both England and India so far, with England claiming points in a demolition of India. Suspensions, fines and ill discipline have been rampant in the series and has certainly got tongues wagging on the part of pundits and so-called experts. To be honest, it’s all rather mundane. The notion of a gentleman’s game still being in existence is rather ridiculous considering the height of professionalism and pressure faced in the international game. Add to that the blight of match-fixing and a changing social landscape of acceptability and it’s almost humorous for displays of aggression to be considered ‘in the spirit of the game’ or not. Marlon Samuels threw his bat at Shane Warne. Altercations between confrontational personalities are inevitable.

To Win (Prices to be updated upon release.)
Australia Australia
Australian stand-in captain George Bailey has been suspended for another slow over-rate transgression and will miss the match against England. Steve Smith will take over in the absence of Michael Clarke, with Australia opting to rest David Warner due to a hamstring niggle. This provides a chance for two batsmen to make a case for World Cup selection in the event of Clarke not recovering from surgery in time for the tournament. Cameron White, who last played ODI cricket for Australia four years ago, and Shaun Marsh, are the call-ups. Josh Hazlewood has also earned himself a rest and with Mitchell Johnson having withdrawn for personal reasons, Smith will only have a squad of twelve to choose from. Whether it is indeed Warner’s dodgy hamstring or the altercation with Rohit Sharma that led to him being fined 50% of his match fee that has led to his exclusion, the public will never know. However, in a perverse turn of events, Bailey’s suspension could work in Australia’s favour. If Clarke does not return for the World Cup and Bailey takes the lead, serving a one-match suspension now leaves his slow over-rate slate clean. In addition, without Warner there to step out of line, they guarantee his participation at the world’s most important fifty over event. Steven Finn ripped through India’s fabled batting line-up with a lethal combination of pace and bounce that very much brings attention to India’s most glaring weakness. Little over a year ago, Finn was offered a flight home from Australia in the middle of the ODI series due to a lack of form and direction. And while he has not really hinted at displays such as his last, it is clear that he is dangerous with his confidence up and a pitch that assists him. James Anderson, rejuvenated following injury, was exceptionally accurate and figures of 4/18 from 8.3 overs was only bettered by Finn’s 5/33. Stuart Broad looked rather toothless and while Chris Woakes impressed against Australia, England would be better off giving the new ball to either Broad or Finn. Speaking of openers, in the batting department Moeen Ali is not really living up to the hype. Exceptionally talented, he must learn to play match situations instead of simply hitting out at every opportunity. Ian Bell will be delighted with his 88 not out in pursuit of India’s small total and the much-needed runs could do the world of good for a player who has been woefully out of touch. Eoin Morgan still remains the middle-order danger man and England’s new captain will relish another toe-to-toe encounter with the Aussies.

Venue
Australia have a decent record at the Bellerive Oval in Hobart, and the last time that England played a match at the venue they were beaten by 46 runs. Shaun Marsh scored 110 in that match and England were bowled out for a paltry 184. The last ODI at the ground occurred two years ago, with run scoring again a difficulty. There is unlikely to be much rain around.

VERDICT: England
England showed a marked improvement in the last outing and with Australia missing the power of Warner at the top of the order, coupled with an integral part of their middle-order balancing act also missing in George Bailey, I’m backing an upset. The Aussies are favourites for the World Cup in home conditions and are the better of the two sides, but I’ve got a feeling that they are going to get rolled in Hobart. Do with that what you will.