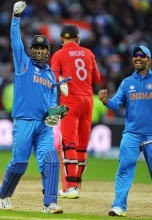 The first scheduled contest of this eagerly anticipated one-day series was washed out in Bristol on Monday, meaning both sides have one less fixture not only to prepare their sides for World Cup glory, but to secure a series win that would have healing properties for all concerned. England have suffered in the transition following last year’s Ashes dismantling and found reprieve only in India’s visit, but not before the visitors took a Test series lead after two matches. For India, the scars of battle away from home are far more deeply etched. Indeed, it has probably never been as bad for the weary travellers as the last three Tests and the subcontinental giants will welcome a return to their favoured format. And they will have a point to prove; the defending World Cup champions have suffered a sharp slump in the one-day game in recent times that must be arrested. If not, heads will surely roll. England
As all sides gear up for next year’s World Cup, England’s preparation will no doubt be the most streamlined. For the next seven months, England will play nothing other than limited overs cricket. Previous Test cricket woes will be shelved and whites traded for blues, which probably could not have come at a better time. Following embarrassment after embarrassment, England finally secured a series victory over India and will benefit from the after-effects of that jubilation. There is still plenty of work to be done however, and their inadequacies will rear their ugly heads another day. In the meantime, their brand spanking new opening partnership will likely jump to the forefront of the conversation. Ian Bell will bat three as Alex Hales saunters his tall, powerful frame into the top order. Hales is in some truly incredible form at the moment, striking three consecutive centuries for Notts last week. He has forced Ravi Bopara out of the squad and it looks as though England will focus on specialist players as opposed to a variety of bitty all-rounders. The visitors have been made to wait 24 long years for a bilateral ODI series win on English soil. In all likelihood, record-breaking celebrations will be delayed with India enduring a woeful run of form. They’ve recently suffered ODI series losses in both New Zealand and South Africa, without winning a game. Considering their status as world champions, this is surely unacceptable for cricket’s richest board. In terms of the batting order, they have two positions that they need to consider. Firstly, is Rohit Sharma an opener, and if so, can we get him to score faster? This seems strange considering Rohit is one of the very few players to score a double century in a fifty-over game, but recently he hasn’t quite fired and in the process, has conspired to suck up his fair share of deliveries. Secondly, is Suresh Raina the right players for the lower-middle order? For someone of his quality to blow so hot and cold on the international circuit is something that India needs to address. India’s bowling attack is rarely settled, but the key to success lies in their magnificent batsmen doing what they were born to do.

Venue
The ODI series heads to Wales, where Sophia Gardens in Cardiff hosts this important fixture. England have never lost an ODI at the ground; in the seven matches between 2006 and now, the hosts have won four with three being washed out. On the subject of rain, there is a 50% chance on Wednesday. However, being a day game, the rain is only likely to arrive later on.

VERDICT: England 13/20
India were thoroughly outplayed in the final three Tests and although they picked up a win against Middlesex, it was a far from convincing display. With England’s added firepower at the top of the order and a sharp seam attack, a fully expect them to come away with the win.