The second match of the inaugural Masters Champions League will see Paul Collingwood’s Capricorn Commanders take on Brian Lara’s Leo Lions in what should be an absolute humdinger of a contest on Friday afternoon.

Both sides boast an interesting mix of aging legends and players who are currently still active in domestic competitions around the world and will be keen to start the competition off on the right foot. To Win Match
Leo Lions 1/1
Draw 35/1
Capricorn Commanders 8/10
Leo Lions
The Leo Lions probably head into this match slightly stronger on paper. While their brains trust consists of Heath Streak, Scott Styris, Brian Lara and Herschelle Gibbs; they can also call on the services of Johan Botha, Robin Peterson and Fidel Edwards who are all still more than capable of playing for their national sides.
You have cast your mind way back to 2008 for the last time that Heath Streak played a competitive game. You can’t really read too much into the former Zimbabwe internationals readiness for the competition by looking into those stats. He will bring a wealth of experience and may even produce a few of the outswingers that brought his name forward into the global cricketing consciousness.
The last time that Scott Styris played competitively was during the new defunct Champions League T20. He turned out for Northern Districts in a qualifying group that included the likes of the Barbados Tridents, the Cape Cobras, the Hobart Hurricanes and the Lahore Lions. His right-arm medium pace was much more effective than his batting in the middle-order. His T20 record speaks for itself. Having played 201 games for New Zealand and various franchises / clubs around the world, he averaged 25.76 with the bat while bagging 125 wickets.
It’ll also be quite interesting to see how the side’s captian, Brian Lara gets on in this tournament. The West Indian legend is fast-approaching his 47th birthday and will probably struggle to come to grips with some of the tournament’s younger bowlers.
While the above-mentioned players will probably pull the crowds in, the Lions are more than likely going to rely on West Indian quick, Fidel Edwards and the two South African all-rounders, Johan Botha and Robin Peterson for results. All three are still active in the professional scene and will all be looking to contribute to the Lions’ push for their title push.
The remainder of the squad includes English legend, turned radio pundit, Darren Gough, Hamish Marshall, Brendan Taylor, Simon Jones and James Franklin. 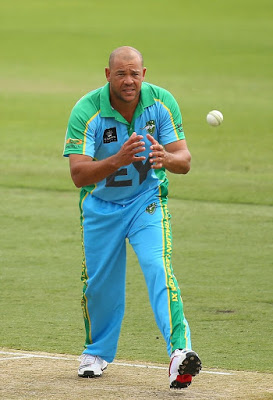 Capricorn Commanders
The Commanders don’t a have the strongest looking line-up in the competition. The backbone of their squad will be made-up of former English Test trio, Michael Vaughn, Paul Collingwood and Geraint Jones. They can also call on the likes of Andrew Symonds, Abdul Razzaq, Ryan McLaren, Rory Kleinveldt and Ben Laughlin.
There really isn’t much to go on looking at the side’s star batsman, Michael Vaughn. The last time he played competitively was in 2009 for Yorkshire in the Twenty20 Cup – England’s then premier domestic T20 competition. He did play both Cricket All-Stars matches in the USA late last year. He managed a score of 30 in the first match before he fell for a golden duck in the second match after he dragged on a Courtney Walsh delivery. He’s not a typically classic T20 player as his strike rate of 112.32 implies.
I’m really keen to see how Andrew Symonds gets on in this competition. The burly Australian all-rounder is perfectly suited to this format of the game as his batting and bowling stats suggest. In 93 T20 matches, he’s notched up 2141 runs at an average of 32.43 backed up with a strike rate of 147.35.
Again, it’s important to look at the players within these squads who are still plying their trade in various professional competitions across the world. The South African duo of Ryan McLaren and Rory Kleinveldt represented sides in this season’s Ram Slam T20 while Ben Laughlin formed part of the Adelaide Strikers side that dominated the group stage of the recently concluded KFC Big Bash.
Other notable players in the squad include Pakistani stalwart, Abdul Razzaq, Jeetan Patel, Chamara Silva, and Suni Joshi.
Verdict: Lions 1/1
With not much else to go on, I’ve taken a look at both squads on paper as well as recent performances from the players here. The Lions look good value at even money with a slightly stronger looking squad. Back them to get the job done on Friday afternoon.
Bet on this match now at Hollywoodbets.net! Haven’t got an account? Open one here now