Mohammad Amir’s return to international cricket was marked with a fabulous win as Pakistan cantered to a 16-run victory against an out of sorts New Zealand at Eden Park on Friday morning.

Attention will now turn to Seddon Park for the second of three T20 Internationals where the visitors will be looking to secure the series before the teams shift their focus to three One Day Internationals. 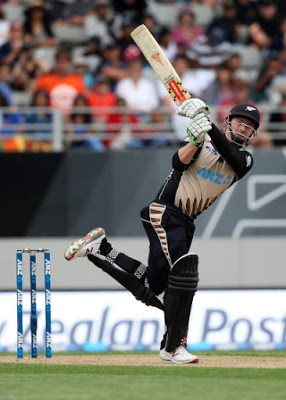 New Zealand
The Black Caps put in a below-par performance in the opening T20 in which their batsmen – bar Kane Williamson and Colin Munro – never got going at all. Having won the toss, Kane Williamson elected to field first on a flattish deck.

They would have been looking to shift the pressure on to the Pakistani top order with early wickets, however, a 33-run opening stand between Mohammad Hafeez and Ahmed Shehzad proved to be the ideal launch pad from which the likes of Akmal, Afridi and Wasim could launch from.

The Black Caps’ bowlers had a day to forget out in the middle at Eden Park. Every one of them with the exception of Mitchell Santer and Matt Henry were far too expensive. Santer returned career-best figures of 2-14 after his four overs, and was the only one who stood up in the face of the Pakistani batting onslaught. Adam Milne, while expensive, did manage to bag four wickets on the day to finish on figures of 4-37.

Kane Williamson – although he scored a 60-ball 70 – more than likely cost his side the game. The Kiwi opener made a stuttering start to his innings in which he ate up far too many deliveries early on as well as running out the red-hot Martin Guptill in the second over. His dismissal brought Colin Munro to the crease, fresh off of his 14-ball 50 in his last game against Sri Lanka. He didn’t disappoint on his way to a magnificent 56 off of just 27 balls.

The Kiwi’s biggest problem, however, was the lack of support from the middle and lower order. The scorecard makes for grim reading after Williamson and Munro with number 4 – 11 only managing  16 runs between them.

It’s obvious where New Zealand went wrong in this match and they’ll more than likely remedy these issues before Sunday’s game. If anything, Corey Anderson could make way for Ross Taylor who has been in great nick of late. Other than that, I’m sure the New Zealand management will persist with this side as they look to blood the group for the World T20 in India later this year. Pakistan
All eyes were on Mohammed Amir as he made his return to international cricket after serving out his five-year ban for spot fixing in 2011. It was, however, Pakistan’s top and lower order who laid the foundations for their bowlers to turn the screw on the New Zealand batsmen.

Mohammad Hafeez scored a brilliant 67-ball 61 as he laid the ideal foundation for the likes of Akmal, Afridi and Wasim. Afridi looked menacing, bludgeoning a fantastic 8-ball 23. There were also magnificent cameos from Akmal 24 (14), Wasim 18 (9) and Malik 20 (18) which helped propel the total to an intimidating 171-4.

While the batsmen did well, it was the bowlers who really impressed. Amir, returning to the international stage for the first time in five years, looked as though he was never away. He bowled fantastically well on his way to figures of 1-31. While the seamers provided the majority of the wickets, Wahab Riaz grabbing three and Umar Gul picking up two sticks; it was the spinners who put the pressure on at the opposite end by restricting the scoring.

There shouldn’t be any changes to the Pakistan XI heading into the second T20 in Hamilton on Sunday morning. As a unit they performed admirably against one of the form teams in world cricket at the moment, and with the likes of Wasim and Amir looking like great additions to the squad, things are looking good heading into the World T20.

Verdict: Pakistan: 13/8
The men in green are looking strong heading into the second T20, and although they’re definitely the underdogs, I think they can wrap the series up on Sunday. Don’t be afraid to back them at 13/8.