The West Indies begin their tour of the world’s best Test nation with an uphill battle at what is likely to be a lively Centurion track. Gone are the days where the West Indians would’ve been prepared for a pace assault, the wickets in the Caribbean now lower and slower than ever before. They did, however, make light work of a South African Invitation XI attack featuring Beuran Hendricks and Rory Kleinveldt. They also happened to run through their opponents for 125 in the first innings, which will do the world of good for a team very much sensitive to confidence. Following their scuppered tour of India amid payment disputes, it is good to see this tour going ahead and cricket prevailing. 
South Africa
With Alviro Petersen in the spotlight following a lean run of 23 innings without a century, JP Duminy’s injury and likely unavailability for the upcoming Test series should see the opener keep his place. Stiaan van Zyl has been named as Duminy’s replacement at seven despite batting at the top of the order, or number three, domestically. In truth, number seven in perhaps the perfect spot to prepare van Zyl for the role of opening in Test cricket. He may very well be facing the new ball and under significantly less pressure. Otherwise, all seems as it should be in the South African camp. Elgar will partner Petersen, du Plessis and Amla next, with de Villiers and de Kock rounding out the middle order. In the bowling department, Dale Steyn, Morne Morkel and Vernon Philander will terrorize the West Indians, with Robin Peterson recalled to the squad as the specialist spinner. 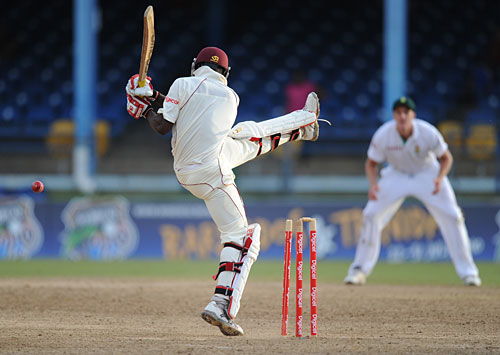 The touring party were dominant in their warm-up fixture but largely due to the individual performances of three. Devon Smith, recalled to the Test squad to replace the injured Chris Gayle, and Marlon Samuels combined for a partnership of 360. Samuels retired after reaching a double hundred while Smith called it a day on 174. This was after Sheldon Cottrell’s 5/16 in 6.1 overs decimated the South African Invitational XI. He may find a place in the Test XI with that display. Ultimately, it is the West Indian batsmen who will be under the most pressure and in that regard, Smith, Kraigg Brathwaite and Jermaine Blackwood will be required to step up to a level that they have never experienced. Captain Denesh Ramdin will have horrible memories of playing in South Africa, despite having an impressive calendar year. Can the West Indies take this Test deep? Unlikely.

Venue
Centurion will likely be at its fast and bouncy best for the first Test and is a ground that South Africa seldom lose on. Bar Australia in February this year, the Proteas won by an innings in the three Tests to precede that. A draw with England in 2009 followed two more innings victories. The last time the West Indies played a Test at Centurion was 2004 and lost by ten wickets.

VERDICT: South Africa 7/20
This is a no-brainer. Although the West Indies continue to improve they are just not at the level of the Proteas. The South African pace attack should make fairly light work of an inexperienced West Indian line-up.