Van Jaarsveld blow for Dolphins ahead of PE trip 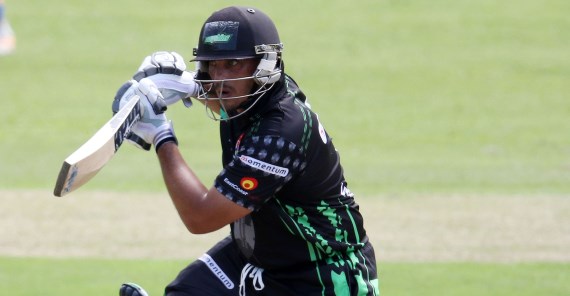 The Hollywoodbets Dolphins will begin 2018 without star batsman Vaughn van Jaarsveld who dislocated his finger at training on Wednesday and will miss their Momentum One Day Cup clash with the Warriors in Port Elizabeth on Friday.

As with all injuries, Van Jaarsveld’s absence from the squad will give another player the opportunity to make a statement as the Dolphins start 2018 with a tricky trip to the Eastern Cape.

The Dolphins won their opening game of the Momentum One Day Cup against the WSB Cape Cobras before losing a final ball thriller to the bizhub Highveld Lions in Potchefstroom before the new years’ break.

“As much as the loss to the Lions hurt us, we were buoyed by the fact that we played good cricket and that if teams are going to beat us then they are going to have to beat us off the last ball,” coach Grant Morgan commented.

With Van Jaarsveld out and the side’s leading wicket taker Mthokozisi Shezi in the grips of exams, the Dolphins will have a handful of players that will be looking to make an impact.

“Luckily we have got excellent cricketers who can cover for these guys with Sarel Erwee and Imran Tahir returning to the side in their places.

“Everyone is in form at the moment, even the guys coming into the side have performed this season for us and in our game in Potch we might have been criticised for getting out in the thirties but I didn’t see too many guys throwing their wickets away.

“I am very excited about our batting unit and it’s good to have the whole squad involved so we can sit with the selection headaches at a later stage,” Morgan added.

The Warriors were losing finalists in the 50 over competition last season and have become a side that seem to have the rub over the Durban men, a situation that Morgan is determined to turn around.

“We have a number of different ways that we can approach the game with a four seamer, three spinner split – this means that we bat down to number nine. We have leg spin, off spin and left-arm spin along with left and right arm seam.

“They are a good side with some great players, but I feel that if we play to our best potential we should have it over them.

“We’ve identified that the Warriors are the team that have spoiled our party in the past.

“They’ve thrown us out of our play-off games previously and we feel that this needs to change.

“We’ve learnt some hard lessons from St George’s Park and haven’t played very well there previously so we want to change that,” added Morgan doggedly.

Despite his wife Pippa expecting the birth of their child, Dane Vilas has been included in the squad for the trip to Port Elizabeth.

The Hollywoodbets Dolphins have also included young speedster Okuhle Cele in their squad for this Friday’s game. The young quick has recently returned from a long injury lay-off.