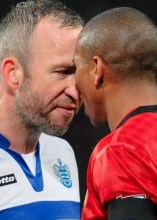 English Premier League champions Manchester United take on FA Cup winners Wigan Athletic in the Community Shield on Sunday. Last season’s curtain-raiser, won by Manchester City over Chelsea, was moved to Villa Park due to the London Olympics. But this summer’s clash between United and last season’s relegated Wigan is back at its traditional home, Wembley Stadium. The fixture will see David Moyes take charge of his first competitive match as United boss, while Roberto Martinez’s successor Owen Coyle will be looking to build on his side’s win last weekend by picking up another trophy for the Latics. United have been allocated 35 000 tickets while Wigan have only been given 15 000. So the champions travel in great numbers while Wigan’s allocation is based on the attendances across their two visits to Wembley in The FA Cup last season. Manchester United
You have to go all the way back to 1985 for the last time that Manchester United played in this fixture without Sir Alex Ferguson on the touchline, so the eyes of the world will be on the Community Shield and Wembley when David Moyes leads Manchester United out. United completed their Asian/Australian Tour with a resounding 5-2 win over Hong Kong club Kitchee FC. They struggled in most of their other matches, managing just one other victory, with two losses and a draw. However, those matches have helped David Moyes pick out some exciting new talents. The Scot singled out Jesse Lingard and Belgian Adnan Januzaj as well as the highly rated Wilfried Zaha, who signed from Crystal Palace. United will conclude the preparations for the defence of their Premier League crown with a pre-season match against Swedish side AIK on Wednesday. They will head home, pockets bulging, from their Asian tour, with Wayne Rooney’s future surely top of Moyes’ to-do list. He said of the Chelsea target, “I couldn’t give you any more update than I’ve said before.”

The want-away striker could be about to hand in a formal transfer request to force through a move to Chelsea after a second offer was rejected by United. He has told teammates that he does not wish to move abroad and claims irreconcilable differences with the club have forced his decision to leave Old Trafford, and Chelsea appear to be the only team seriously interested in his services at the present time. Comments made by Sir Alex Ferguson in May angered Rooney along with Moyes’ words that he would not be first choice this season, which left the forward “angry and confused” according to his friends. Wigan Athletic provided a fairytale ending to last season’s FA Cup Final by beating Manchester City, which was fitting in their 150th anniversary year, and it will be great for them to return to Wembley as they take on the double challenge of Europa League football and the Championship this season. Wigan manager Owen Coyle has spoken of his delight after seeing his side win their first match of the season 4-0 against Barnsley. It helps that they have retained a contingent of high-class players. One of them, Shaun Maloney, tapped in the fourth goal, the strikes by the old guard of Watson and the Scot bookending debut goals by Grant Holt and Leon Barnett, twin promotion specialists who swapped Norwich for Wigan at a combined cost of more than £2m. Perhaps the newcomer with most cause for satisfaction, however, was the former Bolton manager, Owen Coyle. By the end, the Wigan supporters’ thoughts had turned to his predecessor, inquiring: “Are you watching [Roberto] Martínez?”

VERDICT: Manchester United 3/10
United have an excellent record against Wigan. In their 17 meetings United have lost just once, winning 16 times at a combined score of 54-5. Last season the champions annihilated Wigan 4-0 in both league meetings. David Moyes is tipped to start his Manchester United career by picking up his first trophy.