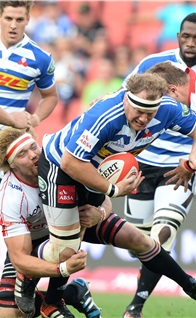 A colossal clash in Cape Town this Saturday fittingly wraps up what has been one of the most fiercely contested title races in recent history, and you couldn’t find two more deserving finalists. Western Province bulldozed their way through the opposition from the first round of clashes to finish comfortably in pole at the close of the regular season, before powering past a passionate Bulls side in the semis to book a spot in their third consecutive final. The Lions finished just three points shy of Province on the log, but have hands down been the most thrilling side in this year’s competition, crashing across the whitewash a whopping 44 times before advancing to the knockout stages. There they flew over for another six tries as they unceremoniously disposed of the defending champions with a brutal 50-20 thumping at Ellis Park. This is will be the third time these two collide this season, Province having drawn first blood back in round three with a commanding 27-14 home victory, while the Lions got their own back a few weeks later when they served Province their first taste of defeat for the year in a narrow 35-33 win at Ellis Park. Western Province
Western Province are expected to be at full strength for Saturday’s showdown as burly number eight Nizaam Carr is expected to be cleared for action after a hip injury cut short his game against the Bulls last week. Fullback Jaco Taute also seems to have overcome the rib injury that had him watching the semi-final from the sidelines. Province have seemingly moved away from their trademark defensive game that has worked so well for them in the past and their exciting backline will prove a handful for the visitors this week. Explosive fullback Cheslin Kolbe will certainly be a marked man after last week’s brace of tries helped Province to a 15-point halftime lead over the Bulls, while Juan de Jongh, Seabelo Senatia and Kobus van Wyk are bound to cause problems for the Lions’ defence. The Lions certainly look the complete package going into Saturday’s clash. Eleven games into the competition and they have scored more points, and more importantly more tries, than any other side, while at the same time conceding the least. They boast a wealth of talent up front with the likes of skipper Warren Whitely, scrum-stopper Schalk van der Merwe in the front row and fleet-footed loose forward Jaco Kriel, who tops the try-scoring list this season with a blistering nine to his credit. Their backline is equally impressive, with speedster Lionel Mapoe in the midfield, the evasive Courtnall Skosan out wide and dynamic pivot Marnitz Boshoff leading the attack. This weekend’s decider will be anything but a boring affair.

VERDICT: Lions 13/10
Both sides are in phenomenal form at the moment, but the Lions are the whole shebang this season and come into this final off the back of two massive wins – a 47-7 battering of the Cheetahs and a 50-20 thumping of the Sharks. I think they’ve proved they have more than enough fire in their bellies to go all the way.

Think we’ve got it wrong? Well leave your comments below and tell us how you think this is going to play out.
Related Topics2014betbettingCape TownCheslin KolbeCurrie CupfinalGolden LionshandicapsLionel MapoeNewlandsOddspickspredictionpreviewtipsWestern Province