The race remains a close one at the top of the table following away victories for both of last year’s finalists in Round 8. The Sharks secured a deserved 25-31 win at Ellis Park, keeping them in pole position, while Allister Coetzee and his charges return from the Free State with the points thanks to a Demetri Catrakilis drop goal in the dying minutes that pushed the visitors two points ahead just in time for the sound of the whistle. On the other side of the table, the Blue Bulls have finally decided to join the party, their brutal desecration of a dejected Griquas side in Kimberley on Saturday keeps their playoff chances, as remote as they are, alive as we head into the ninth week of Currie Cup action.

Blue Bulls vs Sharks | Friday 04 October | Loftus Versfeld | 19:10
It is tough to tell if last week’s 42-point Blue Bull victory is indicative of a remarkable return to form for Pine Pienaar’s side or merely a case of Griquas finally succumbing to effects of an injury riddled season. I couldn’t think of a better way to determine which it is than a Bulls-Sharks match-up at Loftus Versfeld. The Bulls go into this match knowing they remain within reach of the playoffs, but failing to secure the home victory against the log leaders this Friday will all but put an end to such wishful thinking. Pine Pienaar has made only three changes to the side that dished out the 52-10 hiding to Griquas last week, two of them to the front row. Bongi Mbonambi earns a start at hooker in place of the benched Bandise Maku, and fit again prop Frik Kirsten takes over from Werner Kruger at tighthead. In the backline Bjorn Basson returns to the wing, forcing Sampie Mastriet down to the bench.

The Sharks will want to ensure they come away with the points this weekend to take some of the pressure off of their final league fixture, which pits them against defending champions Western Province. A couple of big milestones are set to be achieved for Sharks players. Jacques Botes will equal the record for the most Currie Cup matches when he runs out for the 142nd time in the competition, while at the same time captain Keegan Daniel earns his 100th Currie Cup cap for the Sharks.

VERDICT: Sharks (-1.5) 9/10
The Bulls have had a forgettable season to date, I don’t think that is about to change. The Sharks should take it by about 5 – 10 points away from home.

Griquas v Free State Cheetahs | Saturday 05 October | GWK Park | 14:00
I am sure Pote Human is counting down the days until this injury plagued nightmare of a season is over. 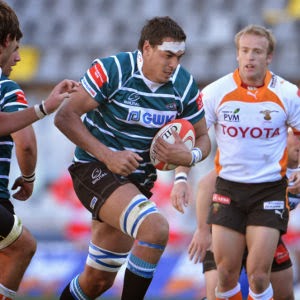 With the wooden spoon a near certainty for Griquas, these last two matches of the regular season will merely serve as preparation for the promotion-relegation series coming their way at the end of the season. It would be an injustice if Pote Human is remembered as the coach that led the North West Province side into relegation before abandoning ship to coach at the University of Pretoria, but unless Griquas shift into damage control mode now, it is a very likely scenario.

The Cheetahs have placed themselves under enormous pressure by failing to come away with a home victory in Round 8. Their loss, coupled with the resounding Blue Bulls victory, means the Pretoria based side are now hot on the heels of Naka Drotske and his men, the Bulls trailing by a mere point. There are three changes to the side that lost out to Province, the first being Raymond Rhule returning to the left wing, with Piet Lindeque shifting over to the right to accommodate Rhule’s inclusion. In the forwards Freddy Ngoza misses out on a start, dropping to the bench to make way for Francois Uys.

VERDICT: Cheetahs (-3.5) 9/10
The Cheetahs will be looking for the bonus point to move as far ahead of the Bulls as possible, and maybe even have a go at usurping third spot from the Lions who are currently four points ahead. We saw last week how vulnerable Griquas are at the moment, the long season having taken its toll, so I think the Cheetahs should manage a comfortable victory. Not much offered in the way of handicaps but the small -3.5 pays a decent enough 9/10.

Western Province v Golden Lions | Saturday 05 October | Newlands |14:00
This game serves to settle the unfinished business between these two sides, after their clash at Ellis Park earlier in the season wound up as a 31-all draw. Allister Coetzee has named four changes to the side that snuck a win in Bloemfontein in Round 8. Last week’s hero Demetri Catrakilis will join up with Louis Schreuder as the starting halfback pairing for Saturday’s clash. Rynhardt Elstadt returns to the flank, while in the second row Michael Rhodes takes over from the inexperienced Tazz Fuzani. Schalk Burger remains on the bench despite his influential 20 minutes last weekend, playing a big part in helping Province pip the Cheetahs. Although, considering how prone the man is to injury, it is probably wise to use the flank as sparingly as possible before the playoffs.

Johan Ackermann is hoping dynamic midfielder Lionel Mapoe will be cleared for duty this weekend, having last played for the Lions in last year’s semi-final loss to Western Province. Elton Jantjies and Dylan des Fountain have been sidelined with injury, so the return of Mapoe will help take some of the sting off of those losses for Ackermann.

VERDICT: Western Province (-5.5) 9/10
Western Province have managed to go this far in the season without suffering a loss, I can’t see them going down for the first time at Newlands against the Lions. Province by 7.