The Telekom Cup is a German football competition that has been held since 2009. The competition features four teams of the Bundesliga playing two semi-finals and a final. The 2013 edition will take place in Monchengladbach. The rules are as follows. Matches are 60 minutes instead of 90 (two 30-minute halves) and managers can make as many changes as they like. If the teams are level after 60 minutes, the match immediately goes to penalties. The two winners meet in the final, the two first-day losers meet in the third-place play-off. The first semi-final sees the hosts Borussia Monchengladbach take on Borussia Dortmund in a derby match, whilst Hamburg face the Bundesliga champions Bayern Munich in the other semi-final. 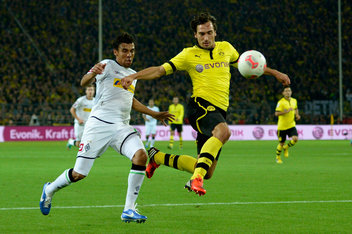 Borussia Monchengladbach
Monchengladbach were decent at home last season. They finished eighth on the log and will be looking to improve on that this season. Monchengladbach have been busy this transfer window signing Raffael (FC Dynamo Kyiv), Christoph Kramer (Bayer 04 Leverkusen, loan) and Max Kruse (SC Freiburg). Manager Lucien Favre will be looking to give these players a run in preparation for the league start which is in a few weeks time. Luuk de Jong will be their go-to man. The young Dutchman was their leading scorer last term with six goals and he will be looking to build on that tally.

Borussia Dortmund
Dortmund did not put much effort into the league last term but still finished second on the log. They focused all of their attention on winning the Champions League. However, they eventually lost 2-1 in the final to rivals Bayern Munich. Dortmund fans will be happy to know Robert Lewandowski will stay at the club for one more season but the Polish star will leave for Bayern Munich next term to join up with former teammate Mario Gotze, who signed for Bayern earlier this year. Lewandowski was the league’s second highest scorer last season with 24 goals. Only Stefan Kiessling (Bayer Leverkusen) scored one more than him to take the Golden Boot award.

VERDICT: Draw 24/10
Dortmund have failed to beat Monchengladbach on their turf in the last three visits. Monchengladbach are tipped to make home advantage count and salvage a draw. Hamburg
Hamburg were inconsistent last season as they battled to maintain winning form. They finished seventh on the log with Artjoms Rudnevs and Son Heung-min their highest scorers, getting 12 goals each. Hamburg will be looking to restore pride after their last meeting with Bayern when the German giants hammered them 9-2.

Bayern Munich
Bayern Munich have made two huge signings this transfer window in Mario Gotze and Thiago Alcantara. They were absolutely brilliant last season as they managed to win the treble; the German Bundesliga, UEFA Champions League and the German DFB Pokal. Pep Guardiola will step in as the new manager after Jupp Heynckes retired at the end of last season. Bayern have a team who depend on each other, there is no player that the whole team has to rely on at times. Mandzukic was their highest scorer in the league with 16 goals, Thomas Muller scored 13 and Franck Ribery managed 10. Arjen Robben is another danger man who could change the game at any given time.

VERDICT: Bayern Munich 7/20
Bayern Munich have won four of the last 5 meetings against Hamburg, scoring 24 goals and conceding just 3. They are tipped to build on that and book themselves a spot in the final.

How I Learned to Stop Worrying and Love My Agent
CAF Champions League: Orlando Pirates vs AC Leopards Preview