The two survivors, from the aptly named pool of death will go head to head on Saturday evening. For the victor, a clash against Scotland or Japan awaits, whilst the loser will take on the ’Boks at
Twickenham next weekend. Both sides will be keen to ensure that they have a date with the former rather than the latter.

Both teams are unlikely to receive much support from the locals, after playing key roles in the early exit of the host nation. However, with every second Aussie under the age of twenty-five bartending in London, and Wales just a short drive South, both sides will be playing with a 16th man.

With the duo playing some classy rugby and so much on the line, this game should be a fantastic exhibition for rugby union. Australia
It’s getting to the point where the name Michael Cheika dominates my Australian previews. Once again, the Wallaby mentor has seen his unorthodox selection methods justified. I won’t harp on about the Hooper and Pocock combination, as I have done enough of that in previous articles. Instead, I’ll focus on two of the backs.
Matt Giteau was probably more surprised by his call-up to the Australian squad than the rest of the rugby world. The veteran centre had been adding to his retirement portfolio in Toulon when he got the call.
While many thought his year’s spent in France would have softened the inside centre up, Giteau has dispelled this theory with some abrasive displays. While he has never shirked a tackle in his life, the former Brumby used to be susceptible to the odd mistimed rush. He now seems to have mastered both his timing as well as his reading of the game – which is scary when you think about how good he was at reading the game in his mid-twenties.
While Giteau’s resurrection has been a revelation, the return to form of Bernard Foley last weekend may prove just as important to the Australians World Cup chances. Foley was poetry in motion against England. He took the ball to the line with authority, didn’t shirk from his defensive duties, and kicked like he was wearing Naas Botha’s boots. However, it was his distribution skills that really caught the eye. There were shades of Steven Larkham whenever he moved the ball last weekend. While we will never know whether the performance was a response to Quade Cooper’s display the week prior or if things just clicked for the Waratahs ten – Cheika’s decision to keep faith with him definitely paid dividends.
With Michael Hooper serving a one-match ban and Israel Folau a doubt with an ankle Injury, the Wallabies are going to need Giteau and Foley to fire if they are to beat this determined Welsh side. 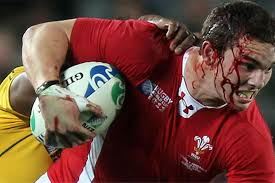 Wales
While both teams will obviously want to avoid the South Africans, there’s also the matter of keeping the momentum going. This rings especially true for the Welsh. The injury-ravaged side could use the morale boost, as they are probably running on sheer adrenaline at this point.
With many of their household names on the casualty list, the Dragons fringe players have taken centre stage. Liam Williams and Gareth Davies would have been understudies for the majority of the tournament had Leigh Half-Penny and Rhys Webb not been injured. Instead, they have taken leading roles for this Welsh ensemble. They have been ably supported by veteran centre Jamie Roberts, who has helped maintain the structure in the midfield. The aforementioned trio will have to be at their best this weekend as the Australian backline pose a massive threat.
The recent history between the sides does not make pleasant reading for those of a Welsh persuasion. The Dragons haven’t beaten the Wallabies since 2008 and have lost the last ten games played between the sides. Their stats against the Australians in World Cup encounters aren’t great either. Wales have only tasted victory in one of the six World Cup games played between the sides.


Verdict: Wales (+7.5) 9/10
I would generally back the Australians to clear the margin but with Hooper out and Folau struggling with that ankle strain, my money is on the Welsh keeping it within the Margin.