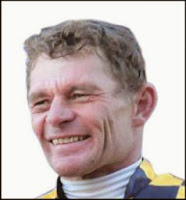 After 30 years in the saddle self-confessed perfectionist, MARTHINUS MIENIE, is entitled to be called a ‘true blue’ veteran of the South African turf. Despite having always ridden at 57kgs and upwards, Mienie has enjoyed a distinguished career as a jockey and is renowned for giving his mounts a strong finish to the wire.  Despite his weight being his handicap, he has a best finishing position of 5th on the National Jockey’s Log and a 4th placed finish in South Africa’s most prestigious race, the Durban July, the latter being his favourite race he likes to compete in. Of all the horses he has ridden in his successful career he has a very soft spot for recently exported Slumdogmillionaire, whom he rode a brilliant tactical race on when winning last year’s Grade 1 South African Classic. This Saturday Marthinus partners the recently relocated son of Dupont, DEPARDIEU in the Jo’burg Spring Challenge for trainer Coenie de Beer. He rates the five-year old entire and punters can expect a decent performance from the former Cape inmate. WINNING FORM, and all its followers, wishes Marthinus Mienie everything of the best in his future endeavours and will be following his career with great interest.

What is your star sign and birthdate?
20 September. I am a Virgo and am a perfectionist which drives my girlfriend, Penny, insane!!!

Where were you born and where did you grow up?
Born in Pietersburg and grew up in Pretoria.

Where do you live?
Alberton, on the crazy farm, with my girlfriend.  We enjoy our animals and have 3 small dogs and a very spoilt boerbull X boxer X furious. Her name is Chocolate. We also have chickens, birds and guinea pigs. We were privileged to own a meerkat who was a real legend. He was a big part of the family but unfortunately Dax has passed away.

Tell us about your family?
I have two amazing children. My son Jarrod, who loves his surfing and taekwando. He is 14 years old and is going to be tall, he didn’t inherit my jockey genes. My daughter Chene is 10 years old going on 16. She enjoys dancing, swimming and horse riding. I also have a girlfriend Penny. She loves horses and anything fluffy, excluding rats and mice. She works for Chesney Van Zyl and helps with my rides.  She helps out at the workriders course and enjoys watching me race.

Do you have a ‘nickname’?
Spanner.

Favourite food?
Anything I can braai and that takes hours to cook.

Favourite music?
The 80’s, anything you think you can sing along to, don’t leave my classic Afrikaans music out.

Favourite soccer team?
Is there a sport called soccer?

Favourite holiday destination?
Africa and the wilderness. I put Bear Grylls to shame.

Which characteristic about yourself do you like the most?
I am extremely sarcastic, but I will never give anyone bad advice.

Is there anything the public don’t know about Marthinus Mienie that they would be interested to know?
As we all know racing is a gambling sport and therefore horses win and horses get beat. In fact more horses get beat than win, but that does not mean that there is anything untodo taking place. It really disappoints me when people have this belief that trainers and jockeys act in an unprofessional manner, other than what is expected. We all make a living out of racing and therefore it is imperative to perform beyond our limits.

Where did you go to school?
John Vorster School in Phalaborwa. My career, unfortunately, made me leave school at the age of 15 to go to the jockey academy where I completed my matric.  Tertiary education was not necessary because I had qualified in the field I had chosen. I furthered my education in horse psychology after riding many horses, Ha! Ha! Ha!

Who were the main people who influenced you to become a jockey?
My mom and dad.

Which senior people in racing had a major influence on you early on in your career?
I would not go as far as to say anybody in particular but will go as far to say that people like Felix had to be admired for his drive to thrive. Piere for what he has achieved and, yet, he has always remained humble and, most important, the competitiveness of the guys I attended the academy with.

You have enjoyed an illustrious career in horseracing. Tell us about it?
I have had a life full of joy and disappointments. The joy always prevails over the disappointments and I, therefore, always look forward to my next winner. My weight has, unfortunately, handicapped me a lot from following the good horses that I rode early in their careers and on to the top.

Can you remember your first winner?
Misty Morn.

How many times have you won the Gauteng Jockey’s Title?
I have never won the championship but am always trying.

Have you won the Jockey Title’s in any other provinces?
No.

How many July’s, Met’s and Summer Cups have you won?
None as yet.

Which is your favourite Grade 1 race to ride in?
The Durban July.

Apart from the above three, which other Grade 1 races in South Africa have you won?
The SA Classic on Slumdogmillionaire.

Best racehorse you have seen in your life, either in the flesh or on the television?
Frankel, saw him on television.

Mention the different countries you have ridden in?
Zimbabwe and Mauritius.

Best friend you have made within horseracing?
I have a lot of good jockey friends but Schalk Barnard and Anton Marcus are the two that really stand out.

What is the best advice you have received about this wonderful sport?
Keep your chin up and your feet on the ground.

Most famous racing person that you have met?
Frankie Dettori.

What is your most comfortable riding mass?
57kgs.

Who were the trainers you rode for before moving to Gauteng?
Mr. Glen Kotzen who I really got on well with.

What was the reason you returned to Gauteng?
To be with my kids but, unfortunately, they moved to St Francis.

Which would you say is the best horse you have ridden to date?
Slumdogmillionaire.

You did very well on SLUMDOGMILLIONAIRE. How do you think he will do overseas?
He really came to the party in the Classic.  Of all the horses I have ridden I have a very soft spot for him. He did have a few setbacks but I still believe he can bounce back and achieve big things.

The Jo’burg Spring Challenge is coming up soon. Have you secured yourself a ride in the race?
I am riding Depardieu and really hope he does well as he is a classy horse and Mr. de Beer has been very supportive.

The Gauteng season is just around the corner. Which horses do you think will be worth following that you could be associated with?
I think Mr. Alec Laird has a very competitive three year old string and would not be surprised if a couple of the Highveld feature winners come from these horses.

Are there any young and upcoming horses that the punters can follow in the future?
I have won on a couple of Mr. Alec Laird’s 3 year olds and feel that they could be talented. I won on a horse called Trip Tease, for trainer Louis Goosen, and he really gave me a nice feel. We all know that in racing there are more factors against you than for you but he might be a horse to follow in his next few starts.

What sort of horse will it take to win the Summer Cup?
The Summer Cup has always been won by the classy horses and I feel that this year will not be an exception.

Which of the trainers do you get the most support from?
Alec Laird, Coenie de Beer and Wallace Tolmay.

Do you think the attitudes of apprentices have changed since the time you were in the academy?
Definitely, they are more outspoken.

Can you name a few apprentices that you think will hold their own once they qualify from the jockey academy?
Akash Aucharuz and Julius Mariba.

You are a professional jockey and make your living by it but what else keeps you passionate about being a jockey?
The fact that every race brings its own new set of challenges. The will to improve.

Do you have any suggestions as to how to make racing more attractive to racegoers to come back to watch races at the racecourse?
I think Tellytrack is a wonderful media for existing owners and punters but I feel this could have slowed down the chances of new people being introduced to racing. I think if a program could be broadcast showing that racing is not dishonest, we could see a lot of new enthusiasts becoming involved in racing.

South Africa is blessed to have great stallions. Which are your favourite stallions?
As you said we are blessed with many great stallions. The breeders have done a great job selecting these stallions and feel that if the right combination, between stallion and mare is achieved, a champion can come from any of the stallions.

If, for any reason, you could no longer be a jockey what would you like to do with your life?
I would like to set up a pre-academy for young enthusiasts.

Does the old maxim, “Behind every successful man is an equally successful woman,” apply to Marthinus Mienie?
Yes, because if Penny stood in front of me she would get in the way hahahaha, just being sarcastic. I do believe racing is very unpredictable and it is a full time career and not a 9 to 5 job.  A supportive partner like Penny makes focusing on racing a lot easier and less stressful.

Would you like to pay tribute to any trainers or owners that have supported you in your career?
Any support is good support.  I would like to thank all the owners and trainers who support me. I would like to let everyone know that they can always expect the best from me.