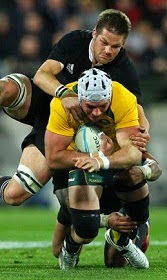 The 2014 Rugby Championship kicks off down in Sydney this Saturday with the clinically brutal All Blacks taking on an unpredictable Wallabies outfit in the first of the year’s three Bledisloe Cup encounters. The Aussies will be fairly confident of their chances of finally putting an end to their telling 12-year drought in the Bledisloe, what with the Waratahs having  comfortably wrapped up the Super Rugby  final a few weeks back while the national side heads into this clash on the back of an impressive seven-match winning streak under coach Ewen McKenzie. It could be that their distinctively Aussie brand of imperious self-confidence may just be forgiven this once. But truth be told the stakes are far higher for Steve Hansen’s travelling All Blacks as they attempt to secure a record breaking eighteenth consecutive Test victory this weekend. The fact that they come up against their Trans-Tasman foes in this potentially momentous match leaves a slightly ominous feel to this historic attempt to right the wrongs of that ill-fated 18-18 draw with Australia in 2012. Australia
Ewen McKenzie has caused a bit of a stir with his recent team selection, much of the noise relating to the inclusion of wild card Kurtley Beale at flyhalf for Saturday’s clash with the world’s top side, despite the fact that he hasn’t started a Test at ten since 2012 and he’s spent the entire Super Rugby season at inside centre for the Waratahs. The more logical choice for playmaker, Waratahs pivot and Beale’s teammate Bernard Foley, will be warming the bench, but is likely to be ushered on sooner than expected if Beale battles with the boot anywhere near as much as he did in last year’s British and Irish Lions Series decider. No other real surprises at the back as Adam Ashley-Cooper and Matt Toomua team up in the midfield, with danger man Israel Folau starting at fullback. Flanker Michael Hooper skippers the side, and is joined in the loose forwards by Wycliff Palu and Scott Fardy. Steve Hansen has made only two changes to the side that ran out in the final Test against England back in June. Strong-running centre Conrad Smith returns from injury to slot in alongside Ma’a Nonu in the midfield, with Aaron Cruden staying on at pivot following the loss of Dan Carter through injury after the national icon managed to break his arm in the Super Rugby final against the Waratahs a few weeks back. A more obvious choice for playmaker, Beauden Barrett, will once again warm the bench, which is more than one can say for the versatile Israel Dagg, who falls out of the match day 23 completely after Ben Smith was preferred to anchor the backline. Up front Wyatt Crockett comes in for Tony Woodcock at loosehead, while the back of the scrum will be without the rested Liam Messam, leaving Kieran Read, Richie McCaw and Jerome Kaino to form the loose trio this week.

VERDICT: New Zealand (-3.5) 9/10
To be totally honest, I was not all that impressed by the All Blacks during the June international Test window, despite their telling 3-0 series whitewash against the touring Poms. They had to work far too hard to avoid a humiliating loss in the opening clash against what was ultimately an England ‘B’ side, and the following two matches only went on to provide glaring examples of Steve Hansen’s inclination to favour certain out-of-form players despite far superior alternatives available to him, often sitting on his bench. As for the Wallabies, Ewen McKenzie has some strange ideas, but in his short stint in charge he has already achieved something his predecessor failed to do with five years at the helm, and that is notching up seven consecutive victories. Take the powerful Aussie presence in the top half of this Super Rugby table this season and it seems to me that this really could be their best shot at staking a claim for this year’s Bledisloe Cup. But I’d still be mad not to back the Kiwis, especially against the Aussies in the Bledisloe. It just may be a lot closer than previous years.