The curtain will come down on the 2014/15 Formula One season this Sunday. While it hasn’t been the most competitive of years at the upper echelons of both the Drivers’ and Constructors’ Championships, there has been a plethora of exciting racing further down the field.
Let’s hope we see some of the hard fought racing further up the order this weekend, as we’re in for a long wait before we see this field take to a race track again.

Previous Race
Nico Rosberg is certainly ending a somewhat subdued season on a high. The Mercedes man managed to make it back to back victories in Brazil, the last time the drivers took to the track. The podium positions in Sao Paulo compromised of the usual suspects. Lewis Hamilton crossed the line in second place, whilst Sebastian Vettel rounded out the top 3.

Vettel’s teammate, Kimi Raikkonen, had a much better time in Sao Paulo than he did a fortnight prior in Mexico. Not only did the Finn manage to avoid crashing into his countryman, Valtteri Bottas, but he also managed to cross the line ahead of the Williams man. While Raikkonen took fourth spot, Bottas was forced to settle for a disappointing fifth. He was followed across the line by the Force India of Nico Hulkenberg, whose sixth place finish did wonders for Force India’s standing in the Constructors Championship. While they may not be able to catch up to Williams and Red Bull, Hulkenberg’s points haul has all but assured fifth place in the Constructors Championship for his team. Daniil Kvyat brought his car across the line in seventh spot, while teammate, Daniel Ricciardo could only manage to claim eleventh. Romain Grosjean and Pastor Maldonado made it a successful outing for Lotus. Grosjean claimed eighth place whilst Maldanado passed the chequered flag in ninth. Sandwiched between the Lotus duo was the Toro Rosso of Max Verstappen.

The Track
The final port of call for the field this year is the Yas Marina Circuit situated in the desert Metropolis that is Abu Dhabi. Like most things in the UAE, no expense was spared when it came to designing this circuit. Designed as a permanent racing facility, the Yas Marina complex can hold a 41,093 strong crowd.

The actual track distance measures 5.554 kilometres and contains 21 turns. Drivers will do battle over 55 of these laps and will cover a total race distance of 305.355 kilometres. The most challenging aspects of this track are the tight chicane through turns five and six- which offers next to no traction – and the sequence between turns 11, 12, and 13 which are exceedingly slow.

With the staggering heat found in Abu Dhabi, the race has to be held under lights. While it is a lot cooler during the evening sessions as opposed to during the day, the actual track temperature still reaches some absurd levels.

Because track temperatures will be so high, a lot hinges of Pirelli’s tyre choice for this race. The Italian tyre manufacturing giant has opted to issue the soft and supersoft compounds for this race in a bid to counteract the tyre wear caused by the track conditions.

A bonus of having a race in a state as arid as Abu Dhabi is that you will almost always see a dry Grand Prix. The downside to this, however, is that it is going to be exceedingly warm. To give you an idea of how hot it will actually be, here are last year’s temperatures and the ones being forecast for this weekends’ event.

With temperatures like that, driver fatigue could become a real issue in this race. We may even see a late lapse in concentration completely change the finishing order. Value BetsLewis Hamilton: To Win Race 8/10
It’s quite strange to see two races pass without the Brit perched on the top of the podium. While most of the field would settle for two podium appearances a year, Hamilton will be peeved to have missed out on first place in the last two Grand Prix’s, especially when you consider both of those races have been won by Nico Rosberg.

The two Mercedes men share a somewhat strained relationship, scratch that, they hate each other with a burning passion that makes the relationship between West Ham and Millwall fans look like a mere friendly rivalry.

Hamilton will be determined to stop his teammate winning three races on the trot, and I fully expect him to succeed. With the current odds sitting at 8/10, I recommend laying a decent stake on Hamilton to reign victorious in Abu Dhabi for the second year running.

Nico Rosberg: Fastest Qualifier 9/10
As I alluded to earlier in the piece, Rosberg has hit a rich vein of form late on in the season. His victory in Brazil means he only needs 4 more points to secure second place in the Drivers Championship.

While Rosberg’s hot streak has seen him claim back to back race victories, I just can’t see him beating Hamilton on this track. However, I do forsee Rosberg claiming his fifth consecutive pole position, and with the odds currently sitting at 9/10, it’s well worth backing Rosberg to be the fastest qualifier in Abu Dhabi this weekend. 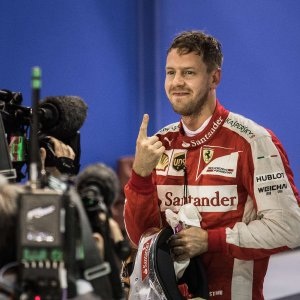 Top Bet
Sebastian Vettel: Podium Finish – Yes 1/3 & Fastest Lap 6/1
Ferrari may not have been able to muster up a real title tilt this year, but they have managed to close the massive chasm that had opened up between Mercedes and themselves prior to the start of the season. The key figure in the Prancing Stags revival has been their German ace Sebastian Vettel.

The former Red Bull man has made an excellent start to life at Ferrari, making numerous appearances on the podium this calendar year. While it was always going to be a struggle to keep up with the Mercedes cars, Seb proved that when the playing fields are somewhat levelled, the two Silver Arrows are not invincible.

The German will be going all out to try and secure second place in the Drivers Championship this weekend. While he’s extremely unlikely to do so (Rosberg would have to score less than four points and Seb would have to win the race), he can still send a message to Mercedes for 2016 season with a good performance here.

I’m expecting Seb to finish the season on a high, and while I’m not bold enough to back him to win in Dubai, I’m more than happy to lay some cash on Vettel to claim the fastest lap at 6/1.

Bet on this race now at Hollywoodbets.net! Haven’t got an account? Open one here now