Only four races remain of the 2013 Formula One season and Sebastian Vettel has all but secured his fourth consecutive World Championship title. The venue for his crowning couldn’t be better, both times the Indian Grand Prix has been held, the German has started from pole, led every lap and won the race. This weekend will almost definitely seem him make it a hat-trick. Love or hate the World Champion, it cannot be denied that he is in a league of his own. The Indian Grand Prix, unless there are some big surprises, looks like its going to be another battle for second place. 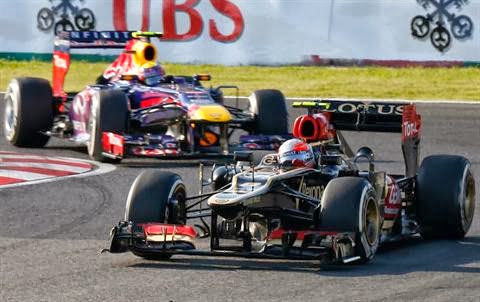 Another race, another win by Vettel. Although picking first place is rather predictable, Formula One is anything but boring as the battle behind Vettel’s Red Bull is more exciting each week. Mark Webber, obviously determined to ruffle some feathers before his exit from F1, upset his teammate on Saturday and claimed a well-deserved pole position, out-qualifying Vettel who suffered from KERS issues. Red Bull had a front-row lockout but Grosjean streaked off the line to sneak the lead from the unsuspecting Red Bulls. The Lotus driver stunned spectators with some sublime driving at Suzuka, cementing his place as the team’s number one driver in 2014 with a third place finish. Hamilton and Vettel had a tussle at the start of the race, sending the Mercedes driver limping back to the pits while the Red Bull team bit their nails on the pit wall, hoping Vettel’s wing had avoided damage. Unfortunately Hamilton’s car did not recover and the Brit retired on lap eight. Fernando Alonso finished in fourth, having spent some time behind Massa who seemed to stay true to his promise of racing for himself, ignoring requests from his race engineer to let Alonso pass. Massa managed to claim the last points position after serving a penalty. Hulkenberg had another decent race which hopefully secures the talented Sauber man a drive for next year. He finished sixth behind Kimi Raikkonen and in front of his teammate Gutierrez, a great achievement for the Sauber team. Rosberg was handed a drive-through penalty after his pit crew let him out in front of Perez, but the Mercedes driver ended up eighth, in front of Jenson Button’s McLaren.

The Track
Although the track is one of the newer circuits on the calendar, it has already gained popularity with the drivers for its fast and flowing design. Comparisons to the great Spa-Francorchamps certainly back up the Buddh International Circuit’s credentials and with the wide track encouraging overtaking, the race should prove to be entertaining, even if most of the racing is going on behind Sebastian Vettel.The race is a total of 60 laps around the 5.125km track, comprising of a combination of fast and slow turns. The high speed layout is challenging and the two DRS zones will provide decent chances to overtake. Pirelli will bring their soft and medium tyres to the usually dusty track, which will clear up as the weekend goes on, bringing with it faster lap times. The weather forecast is hot and humid and surprisingly this track has yet to see a safety car in the race. VALUE BETS
Lewis Hamilton (16/1 a win, 48/10 a place)
Hamilton suffered some bad luck in Japan, but hopefully that changes in India. He has performed fairly well in his past two appearances at the track, ending up in third place here last year. Keep an eye on him in qualifying, at 7/1, a bet for pole might pay out, although he has only managed to qualify second and third in previous attempts. Although he is unlikely to win, I’ve got my money on him for a podium.

Fernando Alonso (20/1 a win, 6/1 a place)
Alonso has, although not yet officially, pretty much watched Vettel grab another World Championship out of his hands. Ever the Vettel challenger, the Ferrari man has sadly fallen further and further behind. A win for anyone other than Vettel at this stage seems improbable but if you’re willing to take a risk, Alonso for the win at 20/1 will have you smiling if he manages to unseat Vettel at the top of the podium. With a third and second place in India in 2011 and 2012 respectively, another podium finish in 2013 seems to be on the cards if history is anything to go by. Back him for a podium and if you’re feeling daring, a win.

Romain Grosjean (20/1 a win, 6/1 a place)
Grosjean was electric in Japan. A brilliant start by the Frenchman, where he shot past the Red Bulls had spectators wondering if finally someone would beat Vettel to the checkered flag. Unfortunately, this was not the case but Grosjean is really emerging as a driver to watch in Formula One. His World Champion teammate has signed for Ferrari so the spotlight will be on the young driver to impress in 2014, and he certainly looks ready to do so. He finished a rather mediocre ninth in India last year but his recent performances are worth a bet for podium on Sunday. Vettel is the only driver to have started on pole in India, but after Webber’s performance in Japan it seems that the World Champion’s teammate could be the most likely culprit should someone beat Vettel to the front of the grid. Red Bull locked out the front row in India last year and it wouldn’t be a surprise to see a repeat performance this weekend. More than likely Vettel will secure another pole but Webber has the potential to challenge him.