Lewis Hamilton’s retirement at Singapore may not have blown the race for the Drivers’ Championship wide open, but it sure has made things more interesting.

The Brit will want to bounce back at Suzuka this weekend and widen the gap between himself and the other two frontrunners. With only five races remaining after Suzuka, the Japanese Grand Prix may be instrumental in determining which driver claims the Championship. 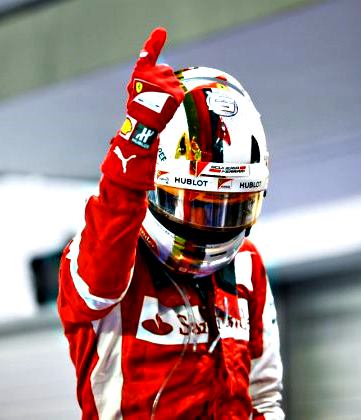 After seeing Lewis Hamilton dominate on their home patch in Monza, the Ferrari team management will be elated with the way their drivers responded in Singapore. Vettel and Raikkonen put in fantastic qualifying stints, which saw them claim pole and third on the grid respectively. Another man who impressed in qualifying was Daniel Ricciardo. The young Aussie made the most of Mercedes’ struggles to adapt to the track. The Red Bull man set some astonishingly quick lap times in that underpowered car of his, which saw him line-up in second spot on the grid. The aforementioned trio would go on to finish the race in the exact same positions they started. While all three never really faced any stiff competition for their positions from each other or the rest of the field, Vettel was particularly dominant. Once the German got through the first corner of the race he started to build a lead, which by the end of the second lap was up to three and a half seconds. He continued to keep the rest of the field at bay and completed his first pole to flag victory of the year.

While the podium positions were basically decided by the fifth lap, there was a battle royale going on for the remaining top ten positions. Nico Rosberg, Lewis Hamilton, Valtteri Bottas and Daniil Kvyat were all battling it out for fourth place midway through proceedings. However a power unit issue would cause Hamilton to retire and leave the door open for teammate Nico Rosberg to steal fourth spot. Valtteri Bottas had managed to get a jump on Daniil Kvyat due to a well-timed pit stop. Bottas went on to finish in fifth, whilst Kvyat had to settle for sixth. Sergio Perez, who had started the race in thirteenth place, took advantage of the numerous retirements to finish in seventh. He was followed across the line by the two Toro Rossos of Sainz and Verstappen. Verstappen refused to swap places with his teammate despite pleas from his team’s technicians. The young Belgian would go on to finish the race in eighth despite his team’s orders to give up the position. The final spot in the top ten was taken up by the Sauber of Felipe Nasr.

The Track
After years of being a Honda test track, the circuit made the step up to the big leagues when it debuted on the F1 calendar in 1987 and subsequently became a firm favourite amongst drivers past and present. Famed for its high speed corners; Suzuka is one of the most challenging tracks on the Formula One circuit. Drivers will fight it out over 53 gruelling laps, with each lap spanning a distance of 5.608km. Each lap contains nineteen turns, with the most notorious of these being the 130R sequence. The 130R sequence is not the only corner that could give drivers a few hassles however; the Dunlop Curve turn is also a tricky one to navigate. Last year, the corner was the scene for former Marussia man Jules Bianchi’s crash. The injuries he sustained sadly lead to the talented Frenchman’s death earlier this year.

With Bianchi’s death still hanging heavy on the minds of drivers and race stewards alike, we are unlikely to see this race go ahead if the weather conditions are similar to last year. Thankfully, this seems unlikely, with the local weather service predicting partly cloudy skies and only a slight chance of drizzle. The teams will also be happy with the temperatures being predicted for race day, especially with the Pirelli tyres being more temperamental than Jose Mourinho after a Chelsea loss. The lower temperatures should help with the medium and hard compound tyre durability and we may actually witness a Grand Prix where Nico Rosberg and Kimi Raikkonen aren’t moaning about tyre degradation. Last year’s race saw a Mercedes one-two, with Lewis Hamilton claiming the spoils. Sebastian Vettel made one of his only appearances on the podium last year when he finished the race in third spot. Value Bets
Lewis Hamilton – Winner (7/10) & Fastest Qualifier (7/20)
After enduring a shocker in Singapore, Lewis Hamilton will want to return to form with a win at Suzuka. Hampered by his team’s inability to get the car correctly set up for the slow corners at Marina Bay track last weekend, Lewis looked a shadow of the driver that has dominated F1 for the last eighteen months. The faster Suzuka track should suit the Mercedes car a lot more than the Singapore circuit did. The Brit took the spoils at last year’s Grand Prix but will be wary of the threat Sebastian Vettel poses on this track.
If the Mercedes team can sort out their set up woes, Hamilton should be able to return to his customary position on the top of the podium.

Sebastian Vettel – Podium Finish Yes (4/10)
Seb rolled back the years last weekend, with a dominant display that was reminiscent of his performances in his heyday at Red Bull. The Ferrari man has now moved within fifty points of Hamilton in the Drivers’ Championship and will be looking to close the gap even further this weekend. He has a fantastic record in Japan, having won four times at Suzuka between 2009 and 2013. The Ferrari man may be coming off the back of a win at Singapore and his team has certainly bridged the speed gulf between themselves and Mercedes, but I think a fired up Hamilton is destined to take the spoils in this one. Seb doesn’t offer great returns for a podium finish but he is more than likely to be on the podium come the conclusion of this race. The former Toro Rosso added another Top 6 Finish to his ever growing collection at Marina Bay last week. While the Russian youngster is yet to reach the heights that many pundits were predicting he would, since he’s made the step up to the Red Bull team he has been consistent. Last year’s event in Japan saw the Red Bull man just miss out on a top ten finish. His eleventh place at Suzuka, twelve months ago, may not be the most promising omen for a Top 6 Finish this time around, however it must be remembered that he was driving a Toro Rosso that struggled to perform in wet conditions. At 8/10 for a Top 6, Kvyat offers great value for money.

Sergio Perez – Top 6 Finish (5/2)
The Force India man was once again left to try to claim some points for his team last weekend after teammate Nico Hulkenberg retired due to another accident. Perez didn’t disappoint and brought his car home in seventh place, narrowly missing out on a Top 6 spot to Daniil Kvyat. The talented Mexican claimed the final spot in the top ten at last year’s Japanese Grand Prix and will be looking to reach loftier heights this time around. With his car seeming to favour the faster tracks, he may be a threat to the Williams and Red Bull stranglehold on the final two positions in the Top 6.