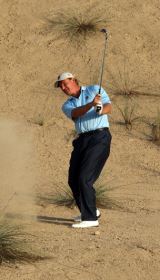 This week marks the end of the Asian Tour for 2014 as players head to the Els Club in Dubai for the Dubai Open. Designed by Ernie Els, what was initially a relatively flat track has become slightly more challenging over the years as the shifting sands of the Dubai desert have added definition to the course. Laid out in two returning loops of nine holes, the par 72 7, 538 yard links style course features rolling fairways and lighting quick greens. There will also be a number of hazards for competitors to deal with, including a number of bunkers. These play especially tough around the greens where getting out of the deeper ones requires a lot of skill. There are also a few water hazards to deal with and these are found on the 7th and 15th holes. Whilst the first two days may play fairly easy, it’s unlikely that Saturday and Sunday will see low scores posted and the winner is going to have to be patient and in control of all aspects of his game. Have the bookies got it right in pricing Tommy Fleetwood up at such a short price or is there value to be found elsewhere? Let’s have a look. SSP Chowrasia (45/1 a win, 99/10 a place)
Chowrasia is playing some good golf at the moment and will be relishing the opportunity to play against a field that he should feel he has a chance of getting the better of. He came out firing in the Panasonic Indian Open last month where he won convincingly and it was his round of 66 on the final day that makes me think he was what it takes to go the distance here. Calm under pressure and with two European Tour wins under his belt in his career already, there’s no reason he won’t get the better of this field. Each way is the bet for me.

Darren Clarke (66/1 a win, 14/1 a place)
Darren Clarke hasn’t shot the lights out this season but 66/1 is a huge price on this stalwart of the game. A bit of research shows that he has been practicing a lot in anticipation for 2015 and what better way to get the ball rolling than with a win on a course that should suit his game. He’s always been known for his course management skills and this links type layout should suit his game to a tee. I’m going each way here.

Jbe’ Kruger (16/1 a win, 7/2 a place)
I’m not surprised to see Jbe’ Kruger priced up so short this week because he’s in great form at the moment. In his last four starts he has found himself in the Top 10 three times and although he hasn’t been playing against the stiffest of competition, he isn’t facing much stronger this week. With his ability to hit the ball long and straight, he should be able to avoid the sand and really dominate this course. Get your bets on early, Jbe’ Kruger has a good chance of ending up on top this week. TOP BET: Prom Meesawat (28/1 a win, 62/10 a place)
You cannot ignore Prom Meesawat this week and apart from Tommy Fleetwood, he’s the most in-form player participating here. Currently sitting at a solid third on the Asian Tour Order of Merit, he has been the definition of consistency over the past six months or so and from twenty starts he has managed eleven Top 20s and seven Top 10s. He also won in September. Meesawat is another player who hits the ball long and should have no trouble handling this course. Each way here is the bet for me.