This week the co-sanctioned Tshwane Open tees off at Pretoria Country Club and as usual, a large number of South Africans make up the field in an event that has traditionally been dominated by the locals. This will be the second year in a row that Pretoria CC will host this event and last time out George Coetzee walked away victorious so it comes as no surprise that he sits near the top of the betting this week. The only player that the bookies think looks better than the big-hitting Coetzee, is Charl Schwartzel, but on a course that can offer some low scores I’ll be avoiding him and looking for value elsewhere.

Measuring only 6,800 yards, this par 70 layout features just two par 5’s but don’t let that fool you, scoring here can get low. With the course playing so short a number of the par 4’s are driveable so for once par 5 scoring can be ignored. Rather, focus on big hitters who can reach the green in one, much like Coetzee did last year. With little water to worry about accuracy off the tee isn’t crucial but accurate iron play is, as mishit shots will end up in one of the numerous bunkers littering the course. Landing in these is unavoidable so look out for players who are strong out of the sand as they will be at a distinct advantage.

You’d also do well to keep a close eye on the locals as they will be used to competing under the uncomfortably hot African sun. So who will walk away the winner this week? Let’s have a look. 
VALUE BETS
Haydn Porteus (30/1 a win & 66/10 a place)
Haydn Porteus ticks a lot of boxes this week and obviously the bookies haven’t caught on to what a threat he is because if they had, he would not be priced up at such long odds. He burst onto the scene earlier this year on his way to winning the Joburg Open and the points he picked up there see him firmly in the lead in the Sunshine Tour’s Order of Merit. A Top 10 last week proved that he has what it takes to compete regularly and I have the feeling we will be seeing a lot more of Porteus this year. Each way is the bet for me.


David Horsey (35/1 a win & 77/10 a place)
Last week David Horsey looked to be in good form in three of his four rounds and had it not been for a disappointing third round he could well have found himself hovering around the Top 5 mark. His game was encouraging though and an opening round of 68 showed that he can go low when everything clicks. I have a feeling that will be the case this week because last year he seemed to enjoy playing this course. At this price Horsey can’t be ignored and I’ll be backing him each way.


Zander Lombard  (40/1 a win & 88/10 a place)
Zander Lombard is a name that not many will be familiar with but he is starting to make waves on the Sunshine Tour and this week he could find himself inside the Top 5. He got the year off to a great start and finished second behind Porteus in the Joburg Open and before that he finished just outside the Top 10 in the SA Open so he clearly has what it takes to be in the mix come Sunday. At this price Lombard is definitely worth an each way bet, let’s hope he comes out firing. 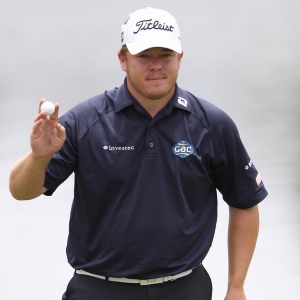 George Coetzee (7/1 a win & 15/10 a place)
It’s always difficult to imagine a player winning back to back tournaments but everything seems to be in George Coetzee’s favour this week. He loves playing in South Africa and having grown up in Pretoria he will be very familiar with Pretoria Country Club. We saw how well he played the course last year on his way to winning comfortably and given his current form I expect that we will see much of the same this week. Each way seems a waste so I’ll be doubling up on the win bet and hoping Coetzee runs away with it.