Winning Form brings you all of their best bets and tips for Saturday’s racing taking place at Rosehill Gardens, Australia. 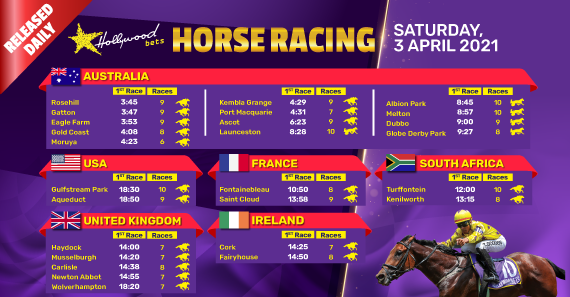 HARMONY ROSE’S record of five runs for three firsts, one second and one third place finish speaks for itself and she is now back against her own sex after finishing third last time out in the Group 1 Guineas, just over a length and a half behind the winner. She came three wide into the straight that day, but nevertheless battled all the way down to the wire. She has cracked pole position and is taken to be the best bet on the day’s card. PERSONAL hit the front at the 400M mark before being collared in the shadow of the post to end up third last time out in a Group 2 event over a mile, beaten just a head. She is drawn the widest of them all in gate ten, but she likes to race up with the pace, so should use that early gate speed to move across without expending too much energy. HUNGRY HEART won a Group 2 race last time out over 1500M by just under half a length. He was bumped shortly after the start that day, but still finished strongly to win a good contest, this despite his jockey putting up 0.5kgs overweight. He jumps from gate five and should be involved in the finish.

SIR DRAGONET won the Cox Plate over 2040M five runs back, but then seemed to lose his way. He showed that he was perhaps coming back to his best when finishing fourth in his last start over ten furlongs in a Group 1 race, just over two lengths back from the winner. He came four wide into the home straight that day and should have finished closer to the victor as a result. He has pulled pole position and should be right up there when they hit the line. MELODY BELLE is a 6yr old mare taking on the boys, but her record in New Zealand is outstanding, having won fourteen out of 26 runs in Group 1 events in her home country, including her last start over ten furlongs by nearly a length and a half. She faces a wide draw twelve, but she should not be underestimated here. MIRAGE DANGER only saw daylight at the 120M mark before finishing well to end up in third spot last time out in a Group 3 race over ten furlongs, just under a length adrift of the winner. From his cozy draw four, he should be included in all bets.

ROCK was bumped shortly after the start before making good late progress last time out to finish just under a length third over 1500M when returning from a 16 week rest. The gelding has gate five and could be the one that they all have to beat. BUFFALO RIVER has consistent formlines to his name and finished fourth over this c&d in a Group 2 event last time out, just over a length back from the winner. He stayed on well that day and notwithstanding his wide draw ten, he should post another honest performance here. YAO DASH went from jump to wire to win his last outing over 1350M at this track by just under half a length. From his gate two, he could prove difficult to reel in over the latter stages of the race.

Today’s value bet, GREAT NEWS is a 4yr old filly taking on males, but she has recorded five wins, three second and one third place finish in her nine starts to date. She chalked up her latest victory last time out over six furlongs by just over two lengths when returning from a 15 week absence. She does face a wide draw thirteen, but she should give the boys a good run for their money. STARSPANGLED RODEO won three runs back over this c&d and then finished second in his next two outings, the latest when a head back over 1500M. From gate three, he will be hoping to go one better today. THY KINGDOM COME chased the eventual winner all the way from the entrance to the home straight before being handed a one and a half length defeat last time out over seven furlongs. He has finished third in a subsequent barrier trial and although draw wideish in gate eight, he should not be lightly dismissed in this field.