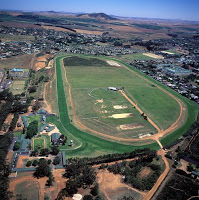 Winning Form brings you their best tips for Durbanville’s racing on Wednesday the 23rd of October. Comments, betting and images are provided! Tips provided come from Winning Form, as well as their back page tipster – Magic Tips by eMeM.

WOODLAND GEM has lots of ability but is plagued with issues. However, she came back very well from a long break in her last start. The daughter of Fort Wood raced handy over this c & d last time before staying on strongly for a close third behind the well ridden, Petty Officer. That run would have brought the Bass inmate on considerably and she should continue to improve today. She has another good draw and merits healthy respect. That said, she faces some decent sorts and will be made to work for victory.

IMPERIOUS GIRL has improved with each of her four starts and she was only caught late over this c & d, three weeks ago. She ended up finishing 4th but was beaten just under one length at the wire and her jockey would have learnt from that outing. The daughter of National Emblem could be held up a little longer this time and she should have more improvement to come. The slight worry is that she is drawn wide at barrier 9.

GRASP YOUR DESTINY had a dismal KZN winter campaign but did improve in his last start in that province He no doubt needed his comeback run in his home town and will be better prepared this time around. The son of Lundy’s Liability had very consistent Cape form prior to leaving for KZN and should improve in this field. He is ideally c & d suited and should give a very good account of himself. Having said that, he takes a near perfect ride as he has only a short but very effective burst of speed.

There are at least four natural pacesetters here and that should ensure a cracking gallop. The intere- sting move of the race has to be the engaging of Karl Neisius on the Dynasty gelding, COUNT MY LUCK. This Mike Stewart inmate has a definite affection for this track and he has been close-up in his last three starts. He finished strongly when outrun late into second over this c & d last time and had his stablemate ROBERTSON on a short head behind him on that occasion. The pair meet on similar weight terms but the top rating could be a totally different proposition in a fast run race. The latter is ultra-consistent but is most effective with frontrunning tactics. However, he clearly won’t have things his own way in this field and could struggle to reverse the form.

This is a competitive handicap to end the day’s proceedings but the value could lie with surprise recent winner, HURRICANE WIND. The daughter of Western Winter had two poor performances at Kenilworth but loved the switch to Durbanville as she produced a strong finish to win her maiden going away over six furlongs, four weeks ago. The third placed runner franked that form with a win next time out and this filly will strip much fitter here. She should love this extra furlong and has lots of scope for improvement. She jumps from a handy draw and is a definite threat with a light mass of 52kgs. She could still be ahead of the handicapper.