30 year old Marco van Rensburg started his career with a bang when he was the champion apprentice in the 2001-2002 season. During the final years of his apprenticeship, he made the bold move to relocate to the then, new academy in Gauteng. He didn’t enjoy immediate success on the Highveld but through sheer hard work and determination, he has got his career firmly on track over the past couple of years. He has struck up highly successful partnerships with the Stuart Pettigrew yard in Gauteng and the Cliffie Miller stable in Kimberley. This past season has seen Marco come right back to his best and he finished 16th on the National Jockey’s Log with 72 winners. He has set his sights on reaching the magical century mark for the new season and could be doing some travelling so must be closely followed. As yet, Marco does not have a definite ride in the upcoming Emerald Cup but is hopeful of securing a mount for the powerful Mike de Kock yard. It is great to see him back at his best again and WINNING FORM will be following his exploits with great interest. 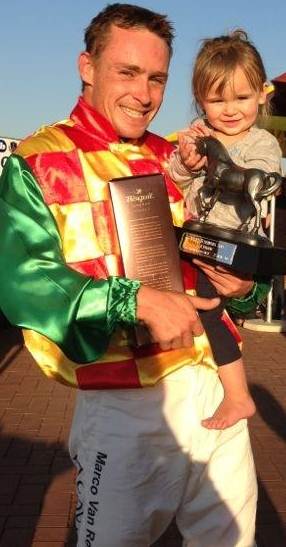 What is your name?
My name is Lucas Marthinus van Rensburg but people call me Marco.

What is your star sign and birthdate?
I was born on 18 April 1983 and my star sign is Aries.

Where did you grow up?
I grew up in Sasolburg and loved every minute of it.

Tell us about your family?
I have a wonderful wife. Her name is Jenna who is a wonderful mother and a great teacher at Waterstone College. My little princess is turning 2 shortly and her name is Haylee. She is the light of my life and we are expecting a new bundle of joy next year (we are very excited and can’t wait!).

Do you have a ‘nickname’?
In the academy they called me ‘oublank’.

Favourite food?
I love my wife’s cooking.  My favourite would have to be her chicken and vegetables.

Favourite drink?
I will have to say coffee! I LOVE my coffee.

Favourite music?
I enjoy music such as Bon Jovi and Def Leopard.

Favourite soccer team?
I will say Manchester United as my father-in-law wouldn’t be impressed if I said anything else.

Favourite holiday destination?
I love to be adventurous and do water sports. The best holiday I have been on so far would be my trip to America.

Favourite author?
Julie Donaldson ha ha (the books we read at night to my daughter!).

Which characteristic about yourself do you like the most?
I would have to say my hard work.

Is there anything the public don’t know about Marco van Rensburg that they would be interested to know?
I enjoy building and fixing things. My wife says I am the best handyman around. I love doing the garden and making our house look great. I have just finished building my daughter a doll’s house for her birthday and, if I can say so myself, it is really good.

Where did you go to school?
I went to Sasolburg Primary and then I went to the academy in Durban. I finished my apprenticeship in Jo’burg.

What sort of student were you and what did you really enjoy studying?
I don’t think I was the best child to teach. I was naughty but the subject I enjoyed most was technical drawing.

What tertiary education did you attain?
The South African Jockey Academy matric.

Did you know anything about horseracing before you went to the academy?
I didn’t know anything. I don’t think I even knew what a horse was like.

What led to you applying to go to the jockey academy?
To be honest my parents took me to the academy. I must thank them because it was the best thing they could have done for me.

Who were your fellow apprentices in the academy?
Chad Little, Tyrone Langdon, Ralton Peters and Robert Fayd’Herbe.

Who were your riding masters at that time?
Robert Moore.

Tell us about that first ride and how exciting was it for you?
I don’t even have words for the first ride. It was out of this world. Something that is so hard to explain that you had to feel it for yourself.

Tell us about your first winner?
My first winner was for Dennis Bosch and the name of the horse was Pearly Queen.

How many winners did you ride as an apprentice?
149.

As an apprentice which trainers took the most interest in you?
Dennis Drier, Charles Laird, Michael de Kock, Paul Matchett and Stuart Pettigrew.

Which really good horses did you win on as an apprentice?
Greys Inn and Hinterland.

Did you find it difficult for you once you qualified to be a jockey?
I think anything you do takes a lot of hard work and without hard work it is difficult.

How hard was it for you to get rides from trainers?
It was not that hard as I went to work all the time and that helped to get the rides.

You appeared to be very settled in KZN. What made you decide to move to Gauteng?
They were opening the new academy in Johannesburg and it was closer to home.

Tell us about the top races you have won for the Pettigrew stable?
SA Fillies Classic, Group 1. It was aboard Spiced Gold and I dead-heated with Anthony Delpech, he rode Here To Win.

What would you say is the main difference to riding in Gauteng as compared to riding in KZN?
In Gauteng we have more seniors which makes racing safer and you are able to plan your race professionally. In Durban you have to hope to get a position as the apprentices try to take you out of the race if you are not careful. The Emerald Cup is just around the corner. Have you secured yourself a ride in the race yet?
No, not yet but I am hoping to get one from Mr. de Kock.

What sort of horse will it take to win the Emerald Cup?
This year is an open race. In the past it was only for sand horses but now it is open to all the high merit rated horses which makes it difficult to pick a winner as they could be unknown on sand.

You are having a great time riding in Kimberley. How did your partnership with trainer Cliffie Miller come about?
I enjoy riding for Mr. Miller. Our partnership started when I was an appie and I was riding for the championship.

What is the most memorable race you have won in Kimberley?
The Sailor Malan (now the Flamingo Mile) for Michael de Kock on a horse named The Ashes.

Which of Cliffie Miller’s horses do you think will be worth following in the near future?
The filly Swift Bow is worth following and I think African Gladiator has more to come. Three others who could be interesting to follow would be Woza Friday, Kingofmountain and Ellipsis.

You know the Vaal sand track very well and also the Kimberley track. In your opinion which of them is the fairest to race on?
Kimberley, by miles, is the fairest racetrack.

Which was the first feature race you won and what horse did you win with?
Jo’burg Merchant’s. I won on Citius, trained by Charles Laird.

How many races have you won?
I can’t tell you off the top of my head but it is in the region of 700.

How many Graded races have you won and tell us briefly about your first one?
Between listed and graded races I have won about 20.

Have you won a July, Met or Summer Cup?
No, I have not won any yet but I will be working towards that.

Up until now you have not raced much in the Cape. When their big season starts will you be looking to get rides in the Cape?
Not just yet. We will have to wait for the new season and see what it holds for us. I have not had any opportunities as yet but if I got the opportunity then I might go and ride in the Cape.

The past season has been very successful for you with 72 wins and R5,6 million in stakes. What plans do you have to better that figure this season?
My goal this season is to ride 100 winners which will mean that I will be looking to travel, and get more rides, so that I can reach my goal.

The prize put up by Klawervlei for the season’s winning jockey is very worthwhile. Are you tempted to make a real effort to compete for that prize?
I try to make the effort every year.

Do you think the attitudes of apprentices have changed since the time you were in the academy?
Yes, there is a huge change in the apprentice’s attitudes and it’s not in a positive way.

Apart from work riding and race riding do you do anything extra to keep yourself in peak condition?
I play golf most Sundays and some days I will walk 9 holes, if I have time.

You are a professional jockey and you earn your living by it. Apart from racing is there anything else you are passionate about?
I love riding but in my spare time I enjoy playing golf.

As a jockey have you any suggestions as to how to get more people to come racing?
I think that there needs to be more advertising to the public in different ways so that we can reach different target markets. I think having racing on supersport will also increase viewership and might encourage more people to come and have a day at the races.

Does the old maxim, “Behind every successful man is an equally successful woman,” apply to Marco van Rensburg?
Yes, of course. Without my wife’s encouragement it would not be the same as she is the one who wakes me up in the mornings and encourages me to reach my goals.