Winning Form brings us their best bets and tips from Albury on Tuesday 13 July 2021.

Winning Form brings us their best bets and tips from Albury, Australia on Tuesday. 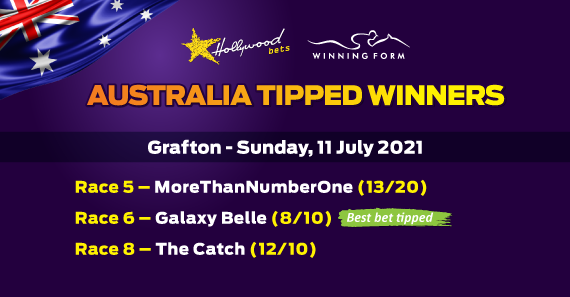 UNDERTHESPOTLIGHT missed out on his hat-trick after two wins over five furlongs when trapped out wide before finishing fourth last time out over five furlongs, 2.2L behind the winner. He stayed on well that day, suggesting that he should appreciate the extra ground on offer here. He is drawn in gate seven and has his peak run after returning from a 21-week break. In addition, he will get 2kgs taken off his back thanks to his claiming apprentice and is taken to be the value bet on the day’s card.

CLAPTONE finished second in his last outing over six furlongs, three and a half lengths back from the winner. He has moved stables since then and turns out here for his new yard. If fully settled into his new surroundings, he should give a good account of himself here, despite being drawn the widest of them in in gate fourteen.

SEVENTH SEAL is seldom far off the action and finished well in his latest start, ending up in third place over five furlongs, just under a length and a half adrift of the victor, when returning from an eleven-week rest. From his kinder draw five, he should be right up there when they hit the line.

IF YOU SAY SO made good late progress when finishing fourth last time out over 1100M, 2.8L behind the winner, but he was reported to have spread a plate that day and should have finished closer to the winner as a result. He jumps from a handy gate four and could be the one that they all have to beat.

FORSUREUSAY finished fifth on debut over six furlongs, three and a half lengths off the winner, but he only saw daylight at the 200M mark that day. He would have learnt from that experience and with the natural improvement that can be expected, he should give a good account of himself here, notwithstanding a wideish draw nine.

KIMMY BE COOL is a 3yr old filly taking on the boys and is drawn one inside the latter. She had solid form before disappointing last time out when stepping up to 2500M, finishing just over ten lengths behind the winner and was immediately moved to a new stable. She was however bumped at the 500M pole during that contest, so perhaps she should not be judged too harshly on the effort. She drops in trip today to what may well be a more suitable distance and should be included in all bets.

The day’s best bet, AUTOBAHN is a 3yr old filly taking on males, but she has finished closer to the winner in each of her last three runs, culminating with her maiden victory by two lengths last time out over this sprint distance. She hit the front at the 200M mark that day and put the race to bed from that point. She takes on stronger here, but she has a cosy draw five and could prove good enough to complete her double.

SUNSHINE MOSHE has finished second in his last two runs, the latest over 1100M at this track, a half-length back from the winner. The drop in distance seems certain to suit him and although having to overcome the widest draw of them all in gate fifteen, he could emerge as the biggest danger to the top choice and go one better today.

LITTLE MISS GRACE is a 4yr old filly who followed up her penultimate run victory over 900M at this venue with a second spot finish next time out over 1100M, 0.8L off the winner. She jumped awkwardly that day and was then bumped shortly thereafter, so that effort was encouraging. She has a far kinder draw three and should be involved in the finish.

SUBMISSION has shown steady improvement in his last three runs, winning the latest over seven furlongs by a short-head, this despite being friendless in the betting markets. The colt has a handy draw three and should be right up there in the firing line.

WILLYBEAFACTOR missed out on his quartet of victories when ending up in fourth spot last time out over 1300M, just under three and a half lengths adrift of the victor. He was a long way back when the field turned for home but was closing in on the frontrunners rapidly over the closing stages of the contest. He will have to negotiate draw ten, but he should be doing his best work late. Although

PACKER’S BOND is recorded as finishing ninth in his last outing over seven furlongs, he was just under four lengths behind the winner and that was in a stronger centre. It should also be pointed out that he had to be held up between the 250M and 200M mark that day and should have finished closer to the winner than he did. He jumps from gate seven and should not be lightly dismissed in this line-up.