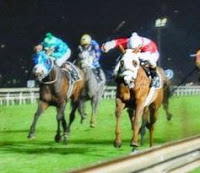 Winning Form brings you their best tips for Turffontein’s Night racing on Friday the 15th of November. Comments, betting and images are provided! Tips provided come from Winning Form, as well as their back page tipster – Magic Tips by eMeM.

EXCEPTIONAL seems to have improved since changing stables. She was rewarded for that when she ran on well to win over this trip on the inside course, eight weeks ago. The imported daughter of El Prado may have escaped with only a three pound penalty and she has faced stronger opposition before. She is arguably better suited to this standside track and she will be given every assistance from the saddle as Anton Marcus takes the ride. The obvious concern is her fitness as she hasn’t raced since that last victory.

Purely on merit ratings, HERE COMES BILLY has lots to do in this contest but the son of Muhtafal seems at his best over sprints and he could prove that tonight. His conditioner has understandably persisted with him over ground but he may finally be resigning to the fact that his charge is a quality sprinter. The gelding has a smart turn of foot which was apparent when he easily completed a hat-trick of wins over sprints distance, prior to his last two starts. He skated past the proven sprinter, SNOW- DON to win over this c & d in mid-August and should confirm the form, despite being 1.5kgs worse off at the weights. He gets the services of Anton Marcus and should go very close in this field. PRINCE JAZEEM is still a lightly raced five-year old but the gelding is quickly making up for lost time. He has already won 4 of his 7 starts, the most impressive of which was when he turned it on smartly to win going away from his field over this c & d, two weeks ago. The son of Toreador was returning from a 13 week break on that occasion so he will strip much fitter tonight. He was handed a five pound penalty for his troubles but still has lots of scope for improvement and he should easily handle this rise in class. He gets the expert services of Piere Strydom and should go extremely well in this contest from a midfield barrier.

Robbie Fradd knows the gelding, INDIAN STRIKER very well and it is fitting that he gets the ride on the son of Van Nistelrooy in tonight’s last leg of the International Jockey Challenge. Fradd has partnered the gelding in most of his races and rated him highly at one stage. The five-year old obviously has his issues but he has had two smart comeback runs and should be cherry-ripe tonight. He ran on nicely for second behind Prince Jazeem (runs in penultimate race) in a competitive contest over this c & d, two weeks ago. He deservedly shoulders a big mass as he drops considerably in class and should go very close to winning.

This is a tricky contest that may be short of a decent gallop. WELLS-CARGO reserves some of his better performances for this course and in particular, this c & d. The son of Hinton Wells isn’t consistent but he was close-up in yielding conditions over 2600m on the inside course behind GOLDEN RING, three weeks ago. The pair meet on level terms tonight but the top rating also ran well behind SHIMMERING GEM over this c & d, four starts ago. He has proven fitness on his side and enjoys racing up with the pace so a likely sedate gallop won’t count against him. The gelding shoulders a light mass of 52kgs and he should be competitive.