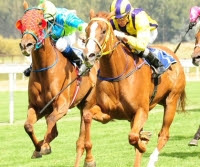 Winning Form brings you their best tips for Vaal’s racing on Saturday the 23rd of November. Comments, betting and images are provided! Tips provided come from Winning Form, as well as their back page tipster – Magic Tips by eMeM.

STEELWING has shown promise in all three of his career starts to date but he appeared in need of his comeback run, two weeks ago. Still, he made steady progress to finish a good third, beaten just two lengths and should strip much fitter today. His pedigree doesn’t convince that today’s extra furlong is within him but the manner with which he finishes suggests that this trip could be ideal. He gets a capable workrider aboard and should go very close.

WINTER PASSION is highly regarded by her conditioner and she contested back-to-back feature races before being sidelined for 30 weeks. She showed her class when she was beaten just over one length on debut over this trip in a feature but then flopped badly in the Nursery next time out. The break would have done the daughter of Var the world of good and she drops into maiden company for the first time today. She won’t be fully tuned-up but takes a huge drop in class and could still prove far too good for her opposition.

CHEDWIN PARK has been restricted to the sand in his last six starts. However, he was ruthless when winning his last visit to the turf by more than seven lengths over this c & d in late August. That earned him the maximum penalty but he meets another ordinary field and he should go very well again.

THE SAINT appears well above-average and has tons of scope for improvement to come. He caused a major stir when he drew off to a comfortable debut victory over the Turffontein 1160m but was then rested three months. However, his comeback run was really encouraging as he ran on nicely for second over 1450m on the inside course. Admittedly, he shouldered a feather weight of only 48.5kgs but he wouldn’t have been fully wound-up and he took a steep rise in class. The son of Announce drops sharply in class today and despite top weight, he will strip fitter and is a serious contender. Gavin Lerena takes the ride.

The six-year old gelding MARCHING BAND has been taking on stronger on the sand recently but he is no slouch on the turf. In fact, he has a decent record on this track and probably more importantly, he is yet to be out of the first three over this c & d from three starts. The son of Parade Leader is as tough as nails and he enjoys dictating his own gallop. He is well handicapped against the three-year olds in this event and is capable of upsetting.