Harlequins will be looking to maintain their flawless Challenge Cup campaign with a sixth successive victory this Friday. Standing in their way is a star-studded Montpellier side who have endured a torrid season thus far. Jake White’s side are sitting on the precipice of a group stage exit from the competition. They currently occupy second spot in Pool 4 but with the third-placed Cardiff Blues taking on the group’s whipping boys, Rugby Calvisano; Montpellier may find themselves out of the running for one of the best-placed runners-up spots.

Can Montpellier sneak through the back door into the knockout phase or will ‘Quins end the hosts European aspirations? 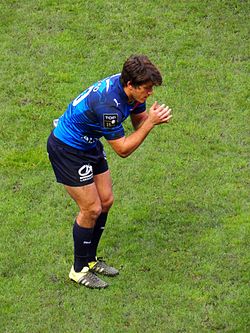 Montpellier
With the amount of money that was spent assembling this squad, you’d have expected them to have given a much better account of themselves in a group that contains a two sides who are operating on less than a tenth of Montpellier’s budget.

So why have the French giants struggled to live up to their full potential? It’s rather hard to pinpoint. Numerous factors seem to be contributing to their underwhelming season. The main factor seems to be head coach Jake White’s selection policy. While there was much fanfare when White and his new foreign signings arrived at the club, the Montpellier faithful seem to have lost patience with the former Springbok coach and his overseas contingent rather quickly.

White is a coach who likes to field players who he has already worked with. He has done this throughout his career. The 2007 World Cup winning Springbok side featured numerous players whom White had work with at under 20 level. This selection policy hasn’t gone down well with the locals, however. While the Montpellier fans seem more than happy to see White select a backline full of international talent, they haven’t been as welcoming of his international forwards. The du Plessis brothers have come in for a bucket load of criticism from the Montpellier fans since their move to the club at the close of last year’s World Cup. I suspect the main reason is that they are keeping a few of the French nationals out of the side.

When fans turn against the coach, it often creates a toxic environment that drastically affects a team’s performances. While recent results have helped quieten the fans, I can’t help but feel White is a few losses away from the sack. That is a subject we’ll deal with later in the season, however.

As I alluded to above, Montpellier have managed a few positive results in recent weeks. Having been defeated by the Cardiff Blues on the 17th of December, White’s side bounced back the following week by defeating their aforementioned opponents in the reverse fixture. They then hammered Agen in a French Top 14 encounter on the 27th of December. Their first fixture of 2016 saw them lose by a solitary point away to Brive which must have been a massive disappointment for a team trying to move their way up the French Top 14 log. Credit must go to them for the manner in which they bounced back from that defeat however.

With their Champions Cup hopes dangling by an even thinner thread than they are this weekend, Montpellier knew nothing short of a bonus point victory would keep them in the hunt for a play-off spot when they took on Italian outfit Rugby Calvisano last weekend. Que Montpellier’s best performance of the season. The French outfit massacred their Italian opponents 47-7. Former Western province pivot Demitri Catrakillis was in impeccable form for Montpellier last week. He distributed the ball in a manner which would have made Steven Larkham jealous. He was also deadly accurate with the boot kicking six out of seven conversions.

Montpellier are going to need Catrakilis to put in another virtuoso display if they are to keep their extremely slim hopes of knockout rugby alive. They’re also going to need their forward pack to fire. ‘Quins’ ‘fatties’ have put in some impressive displays in recent weeks and will be looking to dominate the set phase as well as the breakdown. While Montpellier have a much better pack on paper than their opponents, their illustrious forwards are going to have to be at their best if they are to get the upper hand at the aforementioned aspects of the game. 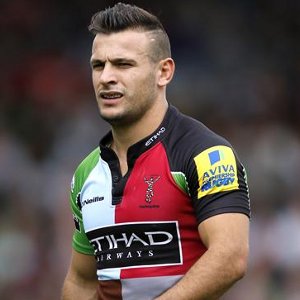 Harlequins
They really should change their sobriquet from ‘Quins to the ‘Challenge Cup Specialists’. While they’ve put in some decent showings during the Aviva Premiership this term – they’ve won six out of their nine fixtures in their domestic league and are the only team to beat Saracens this season – they’ve been nothing short of spectacular in Europe.

While an undefeated group stage run is always impressive, the manner in which Quins have maintained this run has been awe-inspiring. The London-based club has racked up 216 points and have scored 31 tries on their way to securing qualification for the knockout phase of the tournament with a game to spare.

Key to ‘Quins impressive run of form has been their mesmerizing backs. Their back three of Mike Brown, Marland Yarde, and Ross Chisolm have been brilliant on the counter. While the centre pairing of Welsh international Jamie Roberts and England under-20 representative George Lowe, have been solid on both defence and attack. Their half-back pairing of incumbent England nine Danny Care and former All Black Nick Evans, have also been spectacular. Care’s ability to keep fringe defenders on their toes by making sniping breaks around the ruck situation has helped free up space for his outside backs to operate in. While Quins have tried to attack as much as possible, they have also shown a maturity to their game.  Evans has been key to this. His fantastic reading of the game ensures that his side end up making the right decisions nine times out of ten.

There are some fantastic battles set to take place between the two opposing backlines this weekend: Mike Brown v Jesse Mogg, Benjamin Fall v Marland Yarde, Nic White v Danny Care. I could list another three duels but I think you get the gist of it at this point. There are also some classic matchups in between the two packs, with the battle between potential England skipper Joe Marler and Jannie du Plessis being the pick of the bunch.

Verdict: Harlequins 53/20
While most teams would become complacent having already secured qualification to the next phase of the tournament, I can’t see Quins doing this. They’ll be keen to end this segment of the Challenge Cup undefeated and while it’s always a tough ask to go to France and come away with points, it must be remembered that they are playing against an underperforming Montpellier side whose fans aren’t the most partisan bunch at present. Back the Londoners to finish the group stage undefeated.