Only three matches left before the teams are divided into those that made the semi-finals, and those that “also ran” in the 2013 Currie Cup. Last year’s finalists continue to dominate at the top of the table, the two coastal franchises neck-and-neck with 24-points apiece as the competition begins to wind down. It would seem that the last spot on the table is being just as fiercely contested, with the beleaguered Bulls and Pote Human’s Griquas just a point apart ahead of their clash in Kimberley this weekend.

Free State Cheetahs vs Western Province | Friday 27 September | Free State Stadium | 17:05
Province had to fight tooth and nail to come away with a messy win against the Free Staters back in August, but this time they’ll be trying it without the home ground advantage. A home victory for the Cheetahs should be enough to rule out the possibility of them having to appear in their second consecutive promotion-relegation series. Naka Drotske was left with little choice but to ring in the changes following his sides humiliating 50-26 defeat to the Sharks at Kings Park last week. Speedster Raymond Rhule and lock Waltie Vermeulen have been completely cut from the match day 22 following their substandard performances in Durban, Rhule replaced by Piet Lindeque on the wing while Freddie Ngoza takes over in the second row from the axed Vermeulen. Davon Raubenheimer and Rossouw de Klerk have also paid the price for poor performance, but are fortunate enough to find themselves on the bench this week. Oupa Mohoje takes over on the flank, while Trevor Nyakane moves across to tighthead to allow for the inclusion of Schalk van der Merwe at loosehead.

The highly anticipated return of Schalk Burger dominates the news this week after the injury prone flank was named on the bench for this weekend’s clash with the Cheetahs after spending a year and a half sidelined with various injuries. There’s more good news for Allister Coetzee this week with the return of captain Deon Fourie to the starting lineup after two weeks out with a rib injury. Michael Rhodes takes over the number seven jersey this week from Rayn Smid while Michael van der Spuy comes in at centre to cover for Springbok Juan de Jongh.

VERDICT: Western Province (-5.5) 16/10
Province remain the only unbeaten side in this year’s competition and have had their chances for this weekend’s clash substantially improved by the return to fitness of some of their big-hitters. The -5.5 handicap is paying quite nicely, and considering the 24-point-hiding the Cheetahs got off the Sharks last week, I think six points is not too much to ask from Province.

Golden Lions vs Sharks | Friday 27 September | Ellis Park | 19:10
The Sharks drew first blood this season with their 33-25 victory over the Lions in Durban back in the second round of clashes, so expect the locals to be intent on levelling the score when the fight comes to their back yard this Friday. They are just four points behind the table-topping Sharks, so a victory for the Lions will go a long way in keeping their home semi-final aspirations alive. 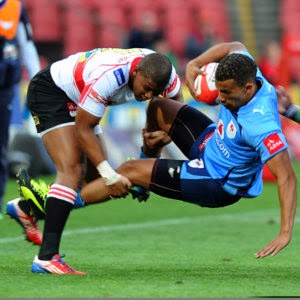 Johan Ackermann has named an unchanged backline for this week’s clash with the competition front-runners, hoping for a repeat of last weekend’s impressive attacking play that helped secure a 35-26 victory over the Bulls. Two changes to the forward pack sees Warren Whiteley return from injury to start at eighthman and Chris van Zyl being named to start in the second row.

The Sharks have been forced to make two changes to the side that destroyed the Cheetahs last week following Springbok call-ups for Marcell Coetzee and Pieter-Steph du Toit. Justin Downey takes over from Coetzee on the flank while youngster Stephan Lewies makes his debut for the Sharks as he takes over in the second row from the influential du Toit.

VERDICT: Sharks (-5.5) 9/4
The Lions head into this match as favourites following their home victory over the Bulls last weekend. But if you remember how the Lions unforgivingly mauled the Blue Bulls back in round three with a massive 39-point victory at Loftus, only to follow it up with a depressing draw against Province at Ellis Park the following week, you would know not to read too much into their performances against their neighbours. The Sharks, on the other hand, just last weekend flattened the very same Cheetahs side that took down the Lions a week prior. I think the bookies are giving us an early Christmas present paying 9/4 for a relatively small handicap. The Sharks by 10.

Griquas vs Blue Bulls| Saturday 28 September | GWK Park | 14:00
Griquas have put up a commendable fight this season. Having gone most of the competition crippled with injuries, the blokes from Kimberley have nevertheless continued to hold their own against the bigger, wealthier unions. Their six consecutive defeats may imply otherwise, but if you consider that five of those were lost within seven points, it becomes a bit clearer. They now have the perfect opportunity to discard the wooden spoon status with the less than threatening Bulls coming into town. No final team list from Pote Human but there aren’t all that many options available thanks to their endless injury woes. Pote Human announced this week that he will be leaving Griquas at the end of this season to take up a position at the University of Pretoria from the beginning of November. Hopefully the side can pull things together for their remaining clashes to give Human a slightly more respectable send off than their current position on the log would allow.

Pine Pienaar has made six changes ahead of his side’s must-win game against Griquas in Kimberley this weekend. William Small-Smith and David Bulbring earn their first starts for the Bulls, Small-Smith takes over the centre duties from Ulrich Beyers who falls to the bench, while Bulbring starts at number five in place of Wilhelm Steenkamp, who falls out of the match-day 22 completely. Jurgen Visser returns at fullback with Clayton Blommetjies relegated to the bench. Handre Pollard returns from an ankle injury to start at pivot in place of Tony Jantjies. Wing Sampie Mastriet and prop Marcel van der Merwe also return to the starting XV this week.

VERDICT: Griquas (-5.5) 14/10
If there is one thing you can tell from the results in this year’s competition, it is that when the Blue Bulls lose they make sure they do so convincingly. They have lost four times this season, all by nine points or more. What I am trying to say is that if they do lose in Kimberley, it is more than likely going to be by more than enough to cover the -5.5 handicap that is paying so handsomely for a Griquas win.