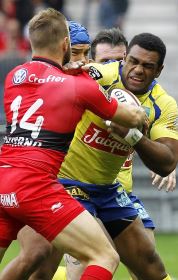 The first European Rugby Champions Cup comes to a thrilling conclusion this weekend with French heavyweights Toulon taking on their escargot-eating compatriots Clermont Auvergne. The competition has experienced high levels of viewership in Europe but hasn’t really caught the attention of even the most ardent South African rugby fan. This final may peak interest in the republic however with South African stalwarts Bakkies Botha and Brian Habana turning out in Toulon colours whilst Michael Classens, Juan Smith and Craig Burden are also amongst the Toulon squad. Clermont are the plucky underdogs going in to this one; they do boast a side loaded with a wealth of experience however. It promises to be an epic encounter between two of the bigger franchises in French and European rugby and with so many internationally capped players amongst the two squads we’re almost guaranteed a highly enthralling game at Twickenham on Saturday. To Win (80mins)
Clermont 5/4
Toulon 7/10
Draw 18/1
Handicaps
Clermont (+2) 9/10
Toulon (-2) 9/10
To Lift Cup
Clermont 13/20
Toulon 11/10
ASM Clermont Auvergne
Clermont are underdogs going into this one but they are more than capable of upsetting the odds, especially with flyhalf Brock James in such scintillating form. His battle with opposite number Frederic Michalak will be one to watch. Clermont have been impressive throughout the tournament, coming through the group stage with five out of six wins. They certainly took their group stage form into the knockout phase where they hammered Northampton 37-5 in the quarter-final and then emerged the victor in a hard fought battle against Saracens in the semi-final. Although they may not possess the household names Toulon boast they do have a well-balanced side. Their pack will be anchored by a formidable second row which includes Canadian veteran Jamie Cudmore. The duel between the Canadian lumberjack and South African hard man Bakkies Botha will be one for the ages. Toulon will be without the services of England international Delon Armitage; the fullback fractured his hand in last weekend’s 25-20 semi-final win against Leinster. The Armitage clan will still have representation in the final through Delon’s brother Steffon who will be one of the loose-forwards in a highly experienced pack. Although there are some big name players in Toulon’s backline the real heart and soul of this team is the engine room which boasts some of the most fearsome and revered names in world rugby. Bakkies Botha and Carl Hayman will have had many a mouthy scrummy fearing for their life during their days in Springbok and All Black jumpers. Although this will be a forward dominated battle the mercurial talents of veteran Frenchman Freddy Michalak and Welsh wizard Leigh Halfpenny could be telling factors in Toulon claiming the cup.

VERDICT: Toulon 7/10
It is going to be a tight one and as much as I’d like to see Clermont put one over the superstars at Toulon, I can’t see it happening, especially considering the amount of big match experience this Toulon side has. 7/10 is a great price, get on.
Bet on this match now at Hollywoodbets.net! Haven’t got an account? Open one here now.