With the Chiefs and Bulls deservedly claiming the weekend off, the third-placed Brumbies and fourth-placed Crusaders have the benefit of running out at home for the playoffs. The Reds nip over the water to face the Crusaders in Christchurch in a contest that promises to be of such a severely brutal nature that I’m getting a nose bleed just thinking about it. The Crusaders haven’t lost at home all season, have reached the knockout rounds of Super Rugby every year for the last twelve years and have claimed the coveted Super Rugby title a record seven times. So in reality, the Reds have absolutely nothing to worry about this Saturday, aside from the unspeakable atrocities planned for them at AMI Stadium, that is. 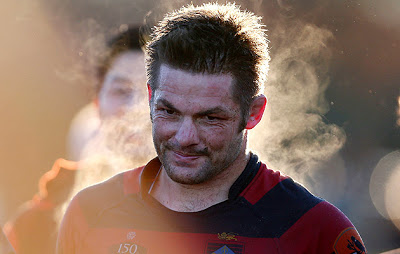 Crusaders
The highly anticipated return of All Black legend Richie McCaw will take place this Saturday with the veteran named on the bench, returning to the game after a six month sabbatical. McCaw and Reds flyhalf Quade Cooper have a bit of history between them, so be prepared for a few flare ups if these two happen to cross paths. The Crusaders will be happy that lock Luke Romano is fit again and has been named to team up with Sam Whitelock in the engine room in the only change to the run on side that took down the Hurricanes last week . Flanker Matt Todd celebrates a milestone, playing in his 50th Super Rugby match for the Crusaders this weekend. Altogether, thirteen members of this Crusaders outfit have at some point or another donned the All Black jersey. With that kind of talent in their arsenal, they really shouldn’t have too much difficulty securing a home victory this Saturday.

Reds
With Reds Director of Rugby Ewen McKenzie heading off to ply his trade in the higher echelons of Australian rugby come the end of the tournament, the Queenslanders are intent on claiming Super Rugby glory in 2013 to honour McKenzie’s efforts with the club over the last few seasons. The Reds will be hoping to have the likes of James Horwill and Will Genia back from injury to help give them a fighting chance against a side they haven’t managed to defeat in Christchurch since 1999. Genia’s anticipated return from injury to team up with the Quade Cooper could create just enough flare in the backline for the Reds to provide sufficient counter attack to the dynamic Crusaders half back pairing of Andy Ellis and Dan Carter

VERDICT: Crusaders (-9.5) 9/10
The Crusaders don’t lose at home. That is just the way it is. I would like to believe the Reds are going to push the home side close this Friday, but it just doesn’t seem likely. The Crusaders don’t make mistakes when they get to this late stage of the competition, especially not in Christchurch. The only real shot the Queenslanders have at causing the upset, in my opinion, is through Quade Cooper’s ability to get under the skin of certain Crusaders players, causing them to become caught up in physical confrontations instead of focusing on the game. It worked for the Chiefs in the final last year. The Crusaders by 12.