Absa Premiership Team of the Season so far? The Team of the Season often causes a lot of debates amongst football lovers with most, of course, favouring players who play for their favourite club. In all honesty, it’s not easy to select one footballer for each position out of four or five players who were brilliant in that position. However, players from the top teams often get the nod. Let’s take a look at the potential candidates for this year’s Team of the Season with 10 games still to play. Last season’s Goalkeeper of the Season, Ronwen Williams, has once again picked up his hand for the award in this campaign. Williams was voted the Absa Premiership’s best goalkeeper ahead of Mamelodi Sundowns’ Denis Onyango. The Bafana Bafana international impressively recorded 12 clean sheets from 30 league matches last season and he has already registered nine clean sheets from 20 matches, making him a huge contender to claim the prize again. The Nigerian international has played a huge role in helping Kaizer Chiefs challenge for the title. Daniel Akpeyi has recently claimed the Nigerian Goalkeeper of the Year 2019 award for his outstanding performances for both club and country. Akpeyi has recorded eight clean sheets in 16 appearances and has conceded just 12 goals. He is the only goalkeeper to win a monthly award so far which makes him a huge contender for the prize. The Ghanaian international deserves a mention after conceding 15 goals in 17 matches while keeping seven clean sheets in the process, which is an excellent achievement for someone who plays for a team that was battling relegation last season. The Maritzburg United shot-stopper has been heavily linked with a move to one of the big three, whilst overseas teams have also shown interest. 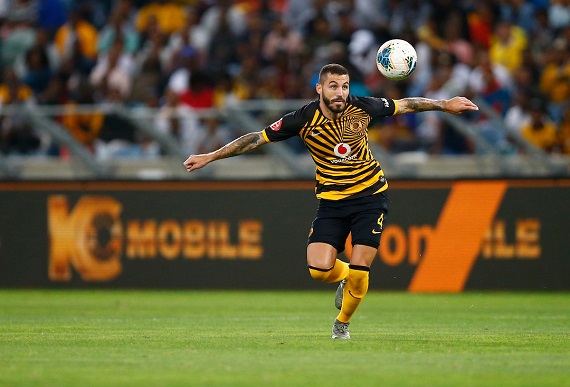 Daniel Cardoso is the only Kaizer Chiefs player who has played every single minute this season after 19 games. The centre-back has contributed immensely to Amakhosi playing a huge role in the best defensive record of conceding 14 goals thus far. Cardoso also contributes offensively scoring four goals and assisting one. His consistent performances has seen him earn a Bafana Bafana call up. Motjeka Madisha has undoubtedly been one of the best performers in the Absa Premiership this season. Mamelodi Sundowns were dealt with a huge blow when last season best defender Ricardo Nascimento was injured but Madisha has stepped up and filled the void with ease. The Bafana Bafana international has been rock solid for the defending champions and is one of the reasons for their superb record of just 14 goals conceded. Rushine De Reuck has been putting some irresistible performances this season, coming up against in-form strikers and pocketing them left right and centre. De Reuck was linked with a big move at the end of the season but the young defender opted to extend his stay at the Team of Choice. The Cape Town-born star has put in a good shift and growing confidence day by day. He certainly will be the best defender in the near future. Lebogang Manyama has been involved in 12 goals this season and he currently leads the assists chart with seven as well as recording three Man-of-the-Match awards. The former Footballer of the Season returned to form and he’s been bossing the midfield. The Bafana Bafana star has played a major role in the revival of Leonardo Castro and Samir Nurkovic’s fantastic first season. Andile Jali started the season very slow, but the Matatiele-born star picked up and proved why he is still one of the best midfielders in the country. Jali has been getting a lot of praises from his coach, Pitso Mosimane, on the outstanding work he’s been putting in for Masandawana and even voted for him to return to the national team. The midfield kingpin has made 13 appearances, scoring one goal. November’s Player of the Month winner Sipho Mbule is definitely one of the contenders for Midfielder of the Season. The young man from Bethlehem, Free State, has been ultra-consistent for both club and U23 national team, helping them qualify for the Olympics in Tokyo, Japan. If Mbule continues with his blistering form, the midfielder can score big come May. This is definitely the most exciting Golden Boot race ever with seven players still in with a shout. Orlando Pirates’ Gabadinho Mhango leads the goal-scoring charts with 12 goals. Three players are on 10 goals namely Kaizer Chiefs’ Samir Nurkovic, Bongi Ntuli and Bradley Grobler. Peter Shalulile and Knox Mutizwa, who led the board for most of the campaign, are on nine goals – along with Kermit Erasmus. If any of these players can score a hat-trick, they will be in a good position for the big prize.