South Africa will play in Australia and New Zealand for their preparations for the 2015 Africa Cup of Nations qualifiers in September. Bafana will face 2014 FIFA World Cup-bound Australia on Monday in Sydney at the ANZ Stadium, followed by a clash against New Zealand four days later in Auckland. Bafana last met Australia in London 2008, with the teams drawing 2-2. The Socceroos will use the forthcoming match to finalise their preparations for the World Cup. In six previous meetings, Australia have scored three 1-0 wins, South Africa won 2-0 in Johannesburg in 1996, and the last two encounters ended in draws. South Africa
Gordon Igesund’s initial 18-man squad that was named for the tour of Australia and New Zealand has been hit with several injuries. Kagisho Dikgacoi and Siyanda Xulu have been withdrawn, with the two being replaced by Hlompho Kekana and Mulomowandau Mathoho of Mamelodi Sundowns and Kaizer Chiefs respectively. Dikgacoi has been playing with pain in all his recent English Premiership matches for Crystal Palace and will need to undergo an operation during the off-season. Defender Xulu of FC Rostov in Russia is recovering from an ankle injury. More recently Bafana were rocked by the withdrawal of three Kaizer Chiefs players in Itumeleng Khune, Siphiwe Tshabalala and Bernard Parker, who are ruled out because of injuries with all three having surgery lined up. Igesund is yet to name the replacements at the time of writing but Senzo Meyiwa is almost certain to replace Khune.

The Bafana coach will also be without Dean Furman, Darren Keet and Daylon Claasen for the encounters as they are unavailable, with the squad boasting an average age of 24. Themba Zwane is the surprise inclusion. Mpumalanga Black Aces coach, Clive Barker, has been calling for the midfielder to get a shot after some outstanding performances for Amazayoni this season, and it seems that Igesund has been listening. South Africa have climbed one spot in the latest FIFA rankings released by the world’s football governing body. Bafana Bafana are now ranked 65th in the world, replacing Republic of Ireland despite playing their last competitive international match back in March. The 2010 FIFA World Cup hosts have also moved from 15th to 14th on the continent. After bowing out in the group stages of CHAN 2014 with a 3-1 loss to Nigeria in their final match, Bafana redeemed themselves with a memorable 1-0 win over 2010 World Cup champions Spain. However, that was short lived as their most recent friendly resulted in a 5-0 humiliation at the hands of Brazil. 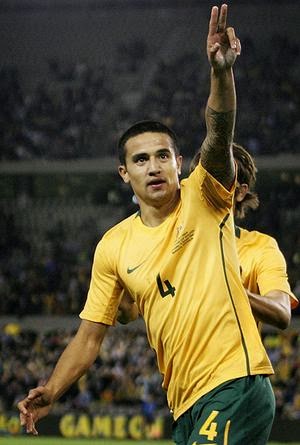 New York Red Bulls star Tim Cahill heads the diverse 30-man provisional World Cup squad announced by Australia, a group hailing from a dozen different leagues on four continents. With seven players aged 21 or younger, Socceroos coach Ange Postecoglou has blended in a substantial dollop of youth alongside the veteran core led by Cahill, Mark Bresciano and Josh Kennedy, heroes of Aussie World Cup campaigns past. Crystal Palace standout Mile Jedinak will anchor the midfield, while Dutch-based winger Tommy Oar offers a valuable wide option and Kennedy brings towering size up front. After decades of frustrating near-misses, the Socceroos have now qualified for three straight World Cups since their move from Oceania to the Asian Football Confederation. They will travel to Brazil with cautious optimism, having been drawn into a rugged Group B alongside Chile, the Netherlands and reigning world champions Spain.

The road to Brazil 2014 proved to be a bumpy one for the Socceroos, who had to overcome some erratic form to secure their progression. A narrow comeback win over Thailand and a loss to Oman in the opening stage served as a warning shot, although they ultimately progressed to the next phase as group winners. Then the Australians opened the next round in miserable fashion, drawing against Oman and Japan before losing to Jordan 2-1. Though stunned, they rallied to claw back into contention with a victory over Iraq before two draws and a 4-0 defeat of Jordan put them on the cusp of qualification. They kept their cool in the final match of the round against Iraq, as substitute Kennedy scored late to seal their passage through. Coach Holger Osieck was dismissed in October 2013 after successive 6-0 defeats against Brazil and France, with former Brisbane Roar, Melbourne Victory and National Youth Teams coach Postecoglou appointed.

VERDICT: South Africa 7/2
Australia will use this game as a final trial before they trim their World Cup squad from 30 players to 23. That could mean that some fringe players and youngsters will get a chance to prove themselves which will effectively mean they won’t be at full strength. Bafana play a possession based game and should control the match with Australia looking to break Bafana on the counter attack. Bafana’s dominance doesn’t always provide the desired result but with poor goalscoring form Igesund would have been working tirelessly with his attackers. South Africa are tipped for the win at a valuable 7/2.