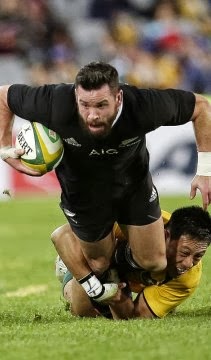 With the Bledisloe Cup having already been wrapped up by the Kiwis back in August following back-to-back victories in the opening rounds of the Rugby Championship, it would seem the outcome of this match is of no significance to anyone. But an unlikely Wallaby victory would achieve two considerable things. Firstly, it would help restore some pride in the green and yellow jersey, a jersey that has had to endure a battering of late, both on the field and off. Secondly, it would put a massive hole in the cloak of invincibility that the All Blacks are strutting around in following their second consecutive season in the Rugby Championship undefeated. Last year, the All Blacks had already wrapped up the three match series with a game in hand, as they have this year, but were sitting on an impressive sixteen consecutive test wins, needing just one more to equal the record of seventeen held by their own side back in the 1960s and the Springboks circa ‘97/’98. They ended up with a heartbreaking 18-18 draw. Can the Aussies pull off a similar upset twelve months later? New Zealand
In a surprise move by All Black coach Steve Hansen, the final Bledisloe Cup clash for this season will see a slightly premature return to international rugby for Kiwi winger Cory Jane. The side-stepping All Black has only managed two ITM Cup games since recovering from a reconstructive knee surgery that took place in March. Jane fills in the gap left by in-form right winger Ben Smith, who slides inside to centre to cover for Conrad Smith, off on a four month sabbatical from the game. Up front the dynamic Brodie Retallick has been dropped to the reserve bench to allow for Jeremy Thrush to earn his first Test start in the second row. The only other change to the All Blacks take place in the front row, with 107-Test veteran Keven Mealamu taking over at hooker from Andrew Hore. Hore is not even included on the reserve list, with Dane Coles preferred to offer cover for Mealamu on the bench. Aaron Cruden has managed to overcome the knee injury that saw him forced off the field at Ellis Park in the Rugby championship decider, and will retain the number ten jersey this week. Will Genia has managed to retain his number nine jersey after proving his worth in Australia’s most promising performance under new coach Ewen McKenzie, tearing apart Los Pumas 54-17 in the final match of this year’s Rugby Championship. Only four starting changes have been made to the side that came away with the spoils in Rosario, with Peter Betham making his Test debut out on the wing, making him the twelfth Australian debutant this year. The loss of Christian Lealiifano at inside centre is a massive blow for Ewen McKenzie, but his replacement, Brumbies teammate Matt Toomua, could prove to be just as effective in the midfield. Ben McCalman takes over at number eight due to the loss of Scott Fardy, out with an eye injury. Ben Mowen shifts across to blindside to accommodate McCalman.

VERDICT: The All Blacks (-14.5) 9/10
The All Blacks only seem to hit a speed wobble when there is a significant milestone up for grabs, such as that consecutive win record, or finishing off an entire season unbeaten, which they were aiming for last year when they enigmatically went down to a young inexperienced English side during the end of year tour. They really have proven themselves to be the finished product this year, and more than worthy of their title as current World Champions. The All Blacks by 20.