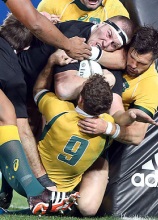 The Wallabies will attempt to break their nine-match drought against neighbouring New Zealand in the third and final Bledisloe Cup clash this weekend. The All Blacks have already done enough to retain the bilateral trophy with a win and a draw during their Rugby Championship campaign, but that isn’t to say that the stakes aren’t high for both sides going into Saturday’s showdown. The Aussies need to bounce back from back-to-back defeats in the Rugby Championship and a shock victory over the champions would go a long way in helping divert the media attention away from the off-the-field antics of the volatile Kurtley Beale. The All Blacks will certainly be eager to pull off a solid victory in Brisbane to avoid the unspeakable horror of back-to-back defeats, as if the humiliation of losing to the Springboks in Johannesburg a few weeks back wasn’t enough. Australia
The Wallabies have made just two changes to the side that handed Los Pumas their maiden Rugby Championship victory. The injured Matt Toomua is replaced at inside centre by the elusive Christian Lealiifano and the bulky Rob Simmons returns to action this week and will team up with Sam Carter in the Wallaby second row. The fiery Quade Cooper returns from his lengthy injury to add some much needed spark to the Aussie bench.

New Zealand
All Black coach Steve Hansen has left Aaron Cruden out of his match day 23 despite his two-match team suspension for missing his flight to Argentina now over. Hansen assured the press that it was not for punitive reasons, but rather to reward Beauden Barrett with another shot to prove his worth at pivot after two solid performances. Colin Slade’s ability to slot into several backline positions sees him retained on the bench as cover for Barrett. Dane Coles comes back into the starting XV with Keven Mealamu dropping to the bench from where he is expected to make his 120th Test appearance. Flanker Liam Messam also returns to the run on side, replacing Jerome Kaino on the blindside of the scrum. Cory Jane will start on the right wing as Hansen opts to rest workhorse Ben Smith.

VERDICT: New Zealand (-8.5) 9/10
The All Blacks will be aiming to overcompensate for their ego-shattering loss to the Boks a couple of weeks back, and what better way to do that than by smashing their ailing Aussie neighbours.