The past weekend saw a deliberately weakened Bayern Munich rolled over by a Bayer Leverkusen side with Champions League ambitions. The top four, as well as the title, have already been decided but automatic qualification for Europe’s greatest club football showpiece is still a bone of contention. This weekend welcomes an almighty clash between Leverkusen and Gladbach which should further illuminate which of the two will saunter into Europe’s upper echelon and which will be forced into a tricky early season battle for their place. Towards the foot of the table, a host of permutations still exist. Mathematically, every side from tenth to the bottom could still find themselves relegated and the push for survival becomes paramount with available matches dwindling away.

Hamburg  11/10
Draw  5/2
Freiburg  24/10
Hamburg escaped the relegation zone for the first time since March with a last-gasp goal to grab a 2-1 victory over Mainz. The importance of the three points can hardly be stressed as Hamburg aim to defend a proud record of being the only side in the German top flight to never have been relegated. They’re now a point above the drop zone and a win here against fellow relegation candidates Freiburg will be just the boost they need. Freiburg took the lead just before the break in their last outing with Paderborn but capitulated to lose to 2-1 and are now equal on points with Hannover at the bottom, only Stuttgart beneath them. It’s difficult to ascertain which side wants this more with only a point separating the two. I’m tempted by Hamburg at 5/10 on the Draw No Bet, with the last couple of head-to-heads ending in stalemates.

Bayern Munich  6/10
Draw  31/10
Augsburg  9/2
It’s two losses on the trot now for Bayern Munich, being dumped out of the German Cup by Dortmund on penalties and losing 2-0 last weekend to Bayer Leverkusen. Having already reclaimed the Bundesliga title for the third year running, Bayern’s full focus is now on their Champions League semi-final meeting with Barcelona, the legs occurring either side of this fixture. With the prospect of an historic double, Bayern will most certainly be resting key players once again here. Guardiola’s only concern will be preservation; injuries have already taken their toll on the Bavarian giants this season. Augsburg played out a scoreless draw with Cologne and while still inside the top six, have plenty of work to do in their push for Europe, starting with the league champions. Despite a weakened side, I’m still backing Bayern to take care of business at 6/10. 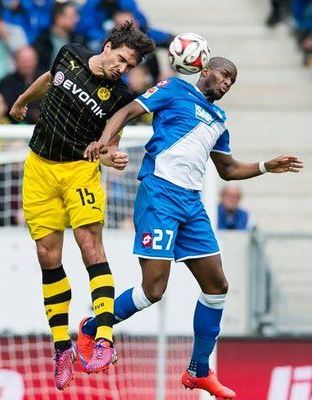 Draw  26/10
Hoffenheim  16/10
Frankfurt’s hopes on an appearance in Europe next season were dashed with a loss to Werder Bremen last time out and they’re also not entirely safe from relegation considering their tremendous form slump. Frankfurt are winless in six, stretching back to March. Kevin Volland opened the scoring but Hoffenheim were forced to settle for a point against Dortmund. It keeps them in the running for a place in Europe but they’ll need to be excellent going forward if they are to realise that dream. It seems Frankfurt have punched out, so to speak, and Hoffenheim to win or draw on the Double Chance is the tip at 5/10.

Borussia Monchengladbach  29/20
Draw  23/10
Bayer Leverkusen  18/10
The marquee fixture of the weekend’s action sees the two form sides in the Bundesliga face off with comfort at stake. Direct qualification for the Champions League is highly coveted as no team wants to enter the early season rigmarole of tricky ties in seldom travelled venues. Gladbach’s Ibrahima Traore came off the bench to score the winner at the weekend and propel Gladbach back into third spot, two points ahead of chasing Leverkusen. Hakan Calhanoglu’s free kick put Leverkusen ahead against Munich, which was followed by a scintillating Karim Bellarabi run to put in Julian Brandt and take the match out of reach of the German champions. Leverkusen are now unbeaten in ten league games, Gladbach are unbeaten in eleven. Crucially, Gladbach have won eight straight matches at home but they haven’t beaten Leverkusen in their last three attempts. Taking Both Teams to Score at 7/10 seems the smart bet here, as this one could go either way.

Borussia Dortmund  1/4
Draw  9/2
Hertha Berlin  9/1
Dortmund still have the DFB-Pokal trophy looming in an otherwise frustrating, disappointing and lacklustre season. There’s still the Europa League to aim for however, sitting three points off sixth-placed Augsburg and only victory will be enough for Jurgen Klopp as he attempts to leave the club with some semblance of dignity. Hertha Berlin’s 2-1 loss to Gladbach sees them back in the relegation mire and should a few clubs below them pick up wins this weekend, the men from the capital may have reason to panic. Travelling to Dortmund won’t fill the side with confidence and it certainly doesn’t lead me to fancy their chances of pulling away from the struggling pack. Take Dortmund at 1/4 as your banker bet this week.

Hannover  19/20
Draw  27/10
Werder Bremen  26/10
Hannover showed the fight necessary to keep them in the top flight as they came from two goals back to draw with Wolfsburg, however it still left them winless in 2015 and was not enough to prevent them falling into the relegation zone for the first time this season. Departing Davie Selke seems intent of leaving Werder Bremen on a high as yet another goal from the young German, the only one of the match, saw his side take all three points against Frankfurt. It strengthens their bid to return to Europe as Werder Bremen now find themselves only a point off the pace. However, stern words at half time against Wolves clearly had an impact on Hannover and at this stage of the season, relegation candidates often find that extra gear. Hannover to claim their first win of 2015 is tipped at 19/20. 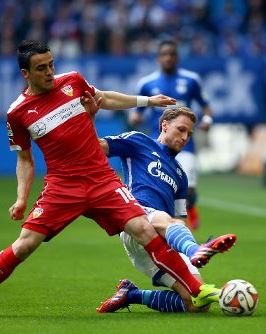 Mainz  23/10
Stuttgart lost an end-to-end battle with Schalke at the weekend following a heartbreaking Florian Klein own goal late in the game. Stuttgart have shown tremendous heart and pride in recent weeks yet it remains a sad season for the Swabians who occupy the foot of table and are three points off their nearest rivals, let alone safety. Only something truly miraculous will save them now. Mainz are sitting in mid-table in relative safety; one more result will likely be enough to ensure that they remain in the Bundesliga next season. Europe is probably too distant a dream and with a little bit less to play for, Mainz may not come out with quite the same intensity as Stuttgart. Back the home win at 11/10.

Paderborn  36/10
Draw  31/10
Wolfsburg  13/20
Misfiring Paderborn came from behind to win 2-1 against Freiburg at the weekend and move out of the relegation zone. Paderborn have battled to find the back of the net for much of the Ruckrunde but two goals from super-sub Lukas Rupp helped assuage the drought. It’s two results on the trot now for Paderborn, who drew with Werder Bremen the week previous. Wolfsburg’s form over the past few weeks has been nothing short of shambolic considering their fiery start to the second half of the Bundesliga season. They’re winless in three matches and at risk of losing what was previously an assured second-place in the league. They gave up a two-goal lead last week and one can only come to the conclusion that their focus is on the DFB-Pokal final instead of immediate concerns. Bas Dost was back on the scoresheet which will come as a relief. Call me crazy, but Paderborn to win/draw on the Double Chance at 11/10 looks great value as they continue their bid to stay in the Bundesliga for consecutive seasons.

Cologne  17/10
Draw  22/10
Schalke  31/20
Chances were few as Cologne settled for a dour goalless draw with Augsburg last time out. They’re still not mathematically safe from the drop but should do enough over the course of the next few games to ensure survival. Schalke secured their first win since March in an exciting match with basement dwellers Stuttgart and bar any catastrophic slip-ups, should find themselves in the Europa League next season. They have a three-point cushion over trailing Werder Bremen and will earmark this match as one to target for maximum points, especially considering Cologne have won only two of their last thirteen Bundesliga fixtures. They have, however, drawn eight of those. Take Schalke to win or draw on the Double Chance at 9/20.