The CAF Champions League reaches its final group game this weekend with Group A’s top two places still wide open for the top three teams. PSL champions Orlando Pirates go into Saturday’s crunch fixture against African giants Al Ahly knowing that a victory will see them into the semi-finals as Group A winners. Orlando Pirates have their work cut out after losing in Congo to Leopards last weekend and Al-Ahly beating Zamalek. Ahly now lead the group with ten points, while Bucs are level with AC Leopards on seven. Zamalek sit bottom on four points and are out of semi-final reckoning. 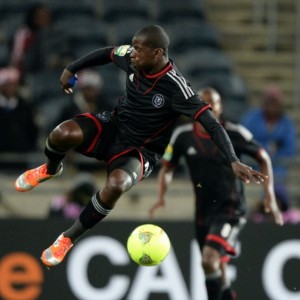 The scenario is as follows: a win against Ahly will see Pirates through and topping the group, even if Leopards win. If three teams are tied at the top it creates a mini-league of points gained against the other two. The Buccaneers would then have seven, Ahly six and Leopards four. If Pirates draw and Leopards win or draw, Ahly will go through as group winners along with the Congolese side. If Pirates lose they are out, even if Zamalek beat Leopards. That scenario would leave another mini-league which would have Leopards on seven points, Zamalek on six and Pirates finishing rock-bottom.

Orlando Pirates
The Buccaneers went down 1-0 to Leopards in Dolisie on Saturday in Congo, after a 72nd minute strike from Dimitri Bissik. Coach Roger De Sa complained of the conditions in his post-match interview. “We’re disappointed with the result, obviously,” De Sa said. “There were trying conditions. What you see on TV is far from what we experience. It was always going to be difficult, but the boys did their best and we can’t fault them on that.” Good news for Pirates is that key players Andile Jali and Happy Jele will return to the starting lineup after missing last weekend’s clash due to suspension. Al Ahly took control of Group A after beating rivals Zamalek 4-2 to move three points clear in their pursuit of a place in the CAF Champions League semi-finals. The result ensures that the African Champions are in pole position to secure a place in the semi-finals ahead of their final group game, with a draw been sufficient to ensure qualification. Spectators enjoyed a thrilling Egyptian derby which saw Zamalek take the lead before Walid Soliman smashed in the equaliser. Al Ahly were ahead in the 15th minute when Ahmed Abdel-Zaher nodded in Ahmed Fathi’s cross before Mohamed Aboutrika scored after the break to make it 3-1. Ahmed Fathi opened the gap even further and although Ahmed Hassan pulled a goal back for Zamalek, it was too little too late.

VERDICT: Draw 22/10
Orlando Pirates thumped the seven time CAF Champions League winners 3-0 in the first round meeting in Cairo. Goals from Thandani Ntshumayelo, Andile Jali and Sifiso Myeni helped secure that resounding result. However, the club was going through a tough patch at the time with key players refusing to play and it was also the fasting month for the Egyptians. Pirates’ home advantage should help them and the draw is tipped which would leave them hoping Leopards lose.