The Capital One Cup quarter-finals are upon us and there are some cracking encounters lined-up. Premier League heavyweights Chelsea and Liverpool both play away to strong Championship sides while Tottenham and Newcastle provide us with the only all Premier League tie. Southampton and third tier side Sheffield United complete the fixture list, in what looks to be the only game unlikely to serve up an upset. There’s some good football on show and money to be made. Let’s get to it. Tuesday 16 December 2014
Sheffield United 5/1
Draw 28/10
Southampton 11/20
League One outfit Sheffield United host Ronald Koeman’s dispirited Southampton side on Tuesday night at Bramall Lane. Southampton will be glad to face their lower division opponents after losing four consecutive league games to Manchester City, Arsenal and Manchester United and revitalised Burnley. The last time these sides met was back in 2009 at St Mary’s Stadium with Sheffield United coming out 2-1 victors on the day. The Blades conquered Mansfield Town, West Ham, Leyton Orient and Milton Keynes 2-1 to reach this stage of the competition. The Saints defeated Millwall 2-0 in round two, followed by a superb 2-1 win over Arsenal and most recently claimed a hard-fought 3-2 victory at Stoke City. Southampton have seen their greatest start to the season unravelling in recent weeks but victory over their opponents will give them a major lift to turn their form around. The Blades have been struggling in the league, suffering six defeats with three of them coming at home and the Saints should prove too strong. Back the Saints for victory at 11/20.

Derby County 5/1
Draw 3/1
Chelsea 5/10
Steve McClaren’s awe-inspiring Derby County welcome Jose Mourinho’s marvellous Chelsea to the iPro Stadium on Tuesday night. Both sides are top of the table in their respective leagues and this has all the makings of a cracking encounter. They met here in last season’s FA Cup with the Blues winning 2-0 with goals courtesy of Oscar and John Obi Mikel. The Rams are flying high at the top of the Championship table and overcame Carlisle, Charlton, Reading and Fulham 5-2 to reach this stage of the Capital One Cup. Mourinho’s men are in a rich vein of form and will take some stopping. The Blues clinched a 2-1 victory over Bolton at Stamford Bridge in round three followed by a 2-1 win at Shrewsbury Town to obtain a place in the quarter-finals. With Chelsea entering a hectic run of matches this month, Mourinho will be expected to make changes. The likes of Andre Schurrle, Mohamed Salah and Loic Remy should all get a chance to impress the boss and I expect them to grasp the opportunity with both hands. A second-choice Chelsea team is not really a weakened one as the Blues have the squad depth to wrap this match in their favour. I’m going with a straight away win, and throwing it into a multiple or two. 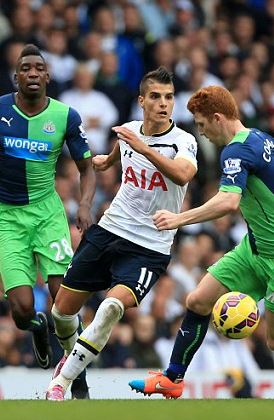 Wednesday 17 December 2014
Tottenham 8/10
Draw 26/10
Newcastle United 31/10
Alan Pardew’s rejuvenated Newcastle United travel to White Hart Lane on Wednesday to take on Mauricio Pochettino’s substandard Tottenham side. Spurs were gifted with three home ties in the Capital One Cup and defeated Nottingham Forest 3-1 in round three followed by a comfortable 2-0 victory over Brighton. The Magpies overcame Gillingham, Crystal Palace and stunned Manchester City 2-0 at the Etihad to reach this stage of the tournament. Many believed it was only a matter of time before Pardew was given the boot and many Newcastle fans were just counting down the days, but miraculously Pardew has turned things around once again. Newcastle currently sit in eighth spot on the Premier League table with just three defeats in their last eleven games and stunned everyone with their 2-1 victory over Chelsea, who many fancied to do the infamous full season unbeaten. Pardew’s men have beaten Spurs in their last two meetings at White Hart Lane including their 2-1 victory this season. The Magpies are tipped to pile more misery on Spurs and their under fire boss.

Bournemouth 37/10
Draw 26/10
Liverpool 7/10
Liverpool travel to Championship side Bournemouth for their Capital One Cup quarter-final tie on Wednesday night. The Cherries have done exceptionally well in the league and currently lie in third place on the table, just two points off leaders Derby County. Eddie Howe’s side have been equally impressive in the League Cup where they’ve beaten Exeter City 2-0, thrashed Northampton and Cardiff 3-0 and most recently defeated West Bromwich 2-1 in Kings Park. The Cherries will be without South African striker Tokelo Rantie after he dislocated his shoulder last month, but they won’t be blunt in attack as their top scorer with nine goals, Callum Wilson, will spearhead the attack, looking to show his stuff against the Premier League outfit. The Reds beat Middlesbrough 14-13 on penalties after drawing 2-2 in round three, and followed up with a 2-1 victory over Swansea. Despite grinding out wins in the League Cup, Brendan Rodgers’ side have struggled to find their best form and as a consequence sit ninth in the league and are out of the Champions League. They’re extremely low on confidence and the Europa League might just be better suited for them to do well in rather than Europe’s premier competition. Liverpool beat Bournemouth 2-0 here in the FA Cup last season and you’d expect them to do the same, but if it’s going to happen, it will probably be in extra-time. Back the draw at 26/10.

Capital One Cup Quad tipped at 33/1