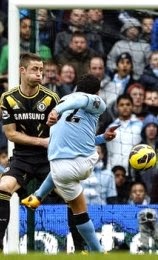 The ninth week of the Premiership serves up a top notch encounter this Sunday when Chelsea host Manchester City at Stamford Bridge. It promises to be a unique occasion, pitting two of the Premier League`s big spenders against each other in what is labelled as the El-Cash-ico. Both sides are currently in the top four in the league, and are priced as the two favourites to win the title. However, the loser of this fixture will take a knock to their title hopes, while a draw would give Arsenal the chance to build their lead at the summit of the Premier League. Fixtures between Chelsea and Manchester City have been one-sided affairs in recent seasons. City have won four of their last five games against Chelsea – including two away wins – while the best result the Blues could muster during this period was a single home draw. Chelsea last managed to defeat Manchester City in 2011, when they won 2-1 at Stamford Bridge. Chelsea
Chelsea are unbeaten in four Premiership fixtures coming into this match, and underlined their class when they whipped Cardiff City 4-1 at the Bridge last weekend to move to second on the log, one point above City. Several Blues players are in good form, and Eden Hazard has stood out in recent matches, with the midfielder putting away three goals in the last three Chelsea games. The Blues have been strong on attack in recent league games after a sluggish start to the season. They have scored ten goals in their last four leagues matches. What has distinguished Chelsea from the other top clubs has been a rock-solid defence that has conceded just five goals in eight games. Fernando Torres scored twice as Chelsea overcame Schalke 3-0 in the Champions League on Tuesday night, with Hazard claiming the third. The Spanish striker was restored to the starting lineup for the first-time since the last group match against Steaua Bucharest, where he suffered a knee injury. It will be interesting to see whether Jose Mourinho opts for Torres or starts Samuel Eto’o to spearhead the attack. Manchester City have had a few wobbles in the first quarter of the season, but have pulled back form in their most recent fixtures with consecutive 3-1 victories over Everton and West Ham. City boasts the most prolific attack in the Premiership, with 20 goals scored in eight games at an average of 2.5 goals a match. Defence continues to be a relatively weak point, and Chelsea is certain to have a few solid opportunities on the City goal this weekend. Sergio Aguero scored twice to help the Citizens recover from going a goal behind and take three points in a 2-1 win in their Champions League tie with CSKA Moscow on Wednesday. That made it five goals in three games for the Argentine striker.

VERDICT: Chelsea 27/20
Chelsea is a formidable team when playing at home, especially under the “Special One”, who is yet to lose at Stamford Bridge in a league match during his career – over 60 games. Chelsea’s stronger defence may prove to be the difference between the two sides and they are tipped to claim the three points.