England and Croatia take centre stage at Wembley Stadium, where both teams start and look to finish their Euro 2020 campaign. 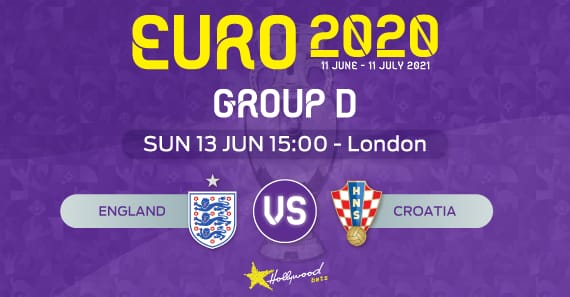 England and Croatia take centre stage at Wembley Stadium, where both teams start and look to finish their Euro 2020, as the final is scheduled to take place in England’s iconic Wembley. After Croatia were triumphant over the Three Lions in the 2018 World Cup, the two nations faced off twice in the UEFA Nations League, where a stale goalless draw took place followed by an England victory in which captain Harry Kane netted a late winner. The victor in this matchup should determine Group D’s winner as both teams are favourites to progress from the group over their counterparts. Let’s dive deeper into the workings of this mouth-watering game.

A UEFA Nations League victory over Croatia does nothing to take the bitter taste of defeat out of England’s mouth after a semi-final exit in the World Cup. With a taste for revenge still on the lips of the Three Lions, the moment has arrived.

England’s confidence will be through the roof with their run of form, conceding one goal to Poland on their way to a six-game winning streak.

Gareth Southgate has opted for a young line-up with seven of his 26-man squad under 22 years of age. The up-and-coming boys have already made their names facing off with one another on the biggest of stages.

Southgate has shown his true colours again in a 10-man defensive selection, with just four forward classified players in Marcus Rashford, Raheem Sterling, Dominic Calvert-Lewin and none other than England talisman Kane who you can back to find the net at a decent 12/10 in the Anytime Goalscorer market for this fixture. After becoming the lowest ranked team to reach a World Cup final, one of the dark horses of the tournament has to be Croatia at 33/1. The Croats’ two warm up matches ahead of the Euros have not gone to plan, but with one loss in eight of their qualifying fixtures, Zlatko Dalic keeps the tactics under wraps until it matters.

A strong spine in a team is vital, and Croatia’s spine has been cut off at the head after losing Mario Mandzukic to retirement. Besiktas’ Domagoj Vida and Dejan Lovren are likely to be the centre-back pairing, Serie A winning Marcelo Brozovic and captain Luka Modric making up the midfield duo and a worthy replacement at the head of attack, Andrej Kramaric, who netted 25 goals in 34 appearances for Hoffenheim this season.

Prediction: England (7/10)
It has been two years since that fateful day in Croatia’s football history, but with 12 players from the 2018 World Cup semi-final victory still kicking in the Croats squad, Dalic is holding onto the past. Southgate might be a defensive minded coach, but the faith in youngsters with the highest of levels in world football evident, the Three Lions will take victory in an all-out war at Wembley Stadium.