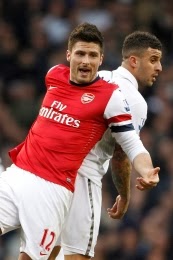 Premier League leaders Arsenal have been handed a mouthwatering tie against North London rivals Tottenham in the third round of the FA Cup. The pair are among the most successful clubs in the competition’s history, with Arsenal having lifted the trophy on ten occasions while Spurs have won it eight times. The only side to have won it more times is Manchester United, with eleven titles. The Gunners last won the famous trophy in 2005, while Spurs’ last tournament success came in 1991. It will be the first time the two clubs have met in the FA Cup since their 2001 semi-final contest at Old Trafford – a game in which Spurs took the lead through Gary Doherty, before being pegged back by a Patrick Vieira equaliser and then a Robert Pires winner. It will be the second time Spurs have visited Arsenal this season – having already lost 1-0 to their North London rivals thanks to an Olivier Giroud goal back in September 2013. Arsenal
Giroud ensured Arsenal finished 2013 on top of the Premier League as his second-half goal clinched a 1-0 win against Newcastle. Arsene Wenger’s side had surrendered first place after Manchester City’s win over Crystal Palace on the Saturday, but just 24 hours later the Gunners reclaimed pole position. That is where they have stayed, following a 2-0 win over Cardiff on New Year’s Day. That and the victory against Newcastle shows the depth of Wenger’s squad. Arsenal were without Mesut Ozil, Aaron Ramsey, Thomas Vermaelen and Nacho Monreal (in addition to long-term absentees such as Alex Oxlade-Chamberlain and Abou Diaby) and Arsene Wenger was still able to not only field a competitive team, but rotate in some areas as well. No more must Wenger rely on a core group of about thirteen internationals who are backed up by mediocre benchwarmers and youth team players. Mikel Arteta was rested in favor of Mathieu Flamini, and the latter replaced Kieran Gibbs because of the absences of Vermaelen and Monreal. Jack Wilshere and Santi Cazorla rounded out a still-world-class midfield, and Lukas Podolski did not even play after an excellent performance against West Ham. Arsenal are going to have to do without playmaker Ozil again here. Tottenham Hotspur headed into the New Year on a high after beating Stoke City 3-0 at White Hart Lane in their final Premier League game of 2013. The win broke a run of four home league matches without a win since late October, and another fantastic victory over Manchester United on New Year’s Day has moved Tim Sherwood’s side up into sixth place, three points clear of United. The restoration of the Vlad Chiriches – Michael Dawson partnership has played a large part in Spurs’ improvement at the back since being torn apart by Liverpool. Neither fared too well alongside the willing but inexperienced makeshift centre-back Etienne Capoue. Tim Sherwood’s side is slowly on the rise, their big win at Old Trafford arguably negating Andre Villas-Boas greatest ever managerial moment.

VERDICT: Tottenham 31/10
Tottenham have held their own against Arsenal of late. In the last eight league meetings they have won four times and drawn once. They don’t have the best record at the Emirates but under Tim Sherwood the players look more determined. Their midfielders seem to be given the licence to attack more and if they continue playing that way here then an away win is definitely on the cards. Tottenham are tipped to pull off a win at a valuable 31/10.