Manchester United and Arsenal renew acquaintances in the FA Cup on Monday with the Gunners facing the daunting task of retaining their trophy as they haven’t won at the Theatre of Dreams since 2006. Both teams are fighting it out in the Premier League for a top four spot, with the Gunners a place and point above the Red Devils in third position. This has been an unkind fixture for Arsene Wenger’s team, having won just once in their last fourteen head-to-heads with United claiming eleven victories. The last time they met in this competition was back in the 2010/11 season when the Red Devils won 2-0 at Old Trafford. 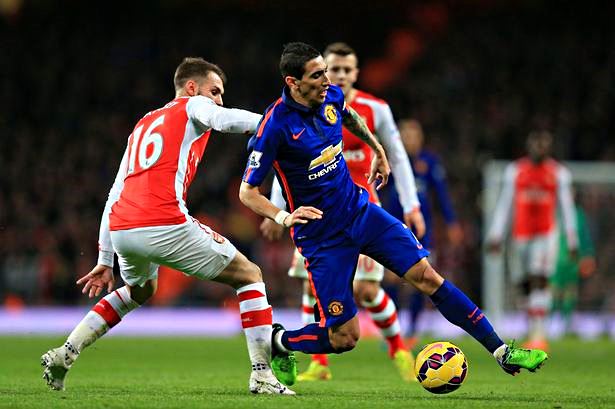 Manchester United
Louis van Gaal’s Manchester United may not have gelled together as a unit this season, but they are picking up results and remain very much in the mix for Champions League qualification. A 2-0 win over Sunderland at the weekend saw United keep pace with their main top four rivals and will now turn their attention to the FA Cup, where Van Gaal will be hoping to claim his first piece of silverware in his maiden season at the club. In the FA Cup, United have had a fortunate run, having managed to avoid matches against teams from England’s top two divisions. The Red Devils defeated League One side Yeovil Town 2-0 in the third round of the competition early last month. They then notched up a comprehensive 3-0 victory over Cambridge United in the fourth round replay between the sides, after the original tie had ended in a goalless draw, and in their most recent outing defeated League One side Preston North End 3-1 to reach this stage of the competition.

United will be relying on Angel Di Maria to be their main source of creativity in midfield and the Argentine is one of few players blessed with the ability to create something out of nothing. Di Maria moves through the gears at pace, with his close control and superb skill meaning he can beat players and take United up the pitch within seconds. His presence alone will cause the Gunners all kinds of problems. Wayne Rooney was let off the leash against Sunderland at Old Trafford and pushed up front alongside Falcao. He scored a brace that handed United a valuable victory. With Van Persie nursing an ankle injury and Falcao still looking a shadow of his former self, Van Gaal has no choice but to continue with Rooney as a striker. He might feel he’s short in midfield, but there is a greater need up front. Rooney’s goals meant he became the first player in Premier League history to score ten or more goals in eleven consecutive seasons. And, at the moment, Rooney looks the only one of Van Gaal’s strikers capable of scoring. Arsenal’s psyche in big games isn’t just a problem anymore. It’s become a deeply ingrained epidemic that strangles the club’s bid for silverware every season. The most recent example came at the worst moment in the season. That’s when Arsenal lost 3-1 in the UEFA Champions League first leg against Monaco. This time they come up against their rivals hoping to defy the outrageous head-to-head record that favours United overwhelmingly. The Gunners must find a balance between attacking ambition and defensive stability. Realistically, the FA Cup represents Arsenal’s best chance of a trophy this season and Wenger will be going all out to see his side through. Arsenal began their run in the tournament with a routine 2-0 victory over Hull City – a repeat of the 2014 FA Cup final – followed by a hard-fought 3-2 victory over Brighton and ousted Middlesbrough 2-0 at the Emirates to get this far.

Although the Gunners haven’t won there, the Old Trafford fear factor has clearly been dented in the past two seasons and it is doubtful whether the likes of Arsenal will look over their shoulder with the same trepidation as they once might have done. Alexis Sanchez is the most potent player in the Arsenal squad in front of goal. He is renowned for his ability to sneak past defenders and create space for himself. His mobile play and diagonal movement is a nightmare for defenders which makes it literally impossible to man mark him. Wenger unquestionably has good options in his attacking midfield department. Talented, skilful players such as Sanchez, Santi Cazorla, Mesut Ozil, Jack Wilshere and Alex Oxlade-Chamberlain are the players he can pick to fill the attacking three in the 4-2-3-1 formation he usually uses. Arsenal definitely have one of the better attacking midfields compared to other Premier League teams. Further up the pitch, Olivier Giroud will be expected to get the nod over Danny Welbeck and look to extend his tally of nine goals in eleven starts.

VERDICT: Manchester United 27/20
Both teams share an array of attacking talent and two managers who advocate aesthetically pleasing football and like their teams to dominate possession. Subsequently, the battle for control could prove pivotal. This is a very tough to call but Arsenal’s horrible record here paves way for a United win at 27/20.