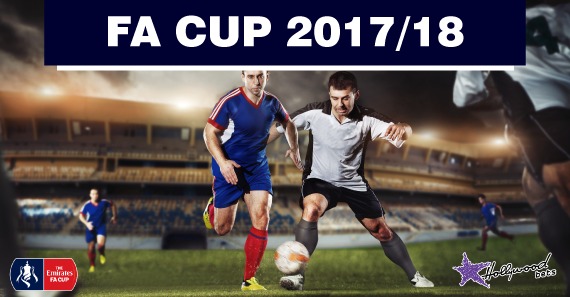 Our football pundit previews the FA Cup semi-final matchup between Manchester United and Tottenham which kicks off on Saturday 21 April 2018.

Manchester United and Tottenham will battle it out for a place in the final at Wembley on Saturday in what promises to be a cracking contest! This competition presents the final chance for both teams to get their hands on a piece of silverware this season.
United lost 2-0 to Spurs during their last visit to the national stadium in January, but won the first meeting of the season 1-0 at Old Trafford in October, thanks to a late Anthony Martial goal. Both teams will be looking to bounce back after defeats last time out. Can Spurs reach the final for the first time since 1991? Or will United go one step closer to lifting the FA Cup for the second time in three years?

*Please note that this article was written prior to Premier League midweek games from 17-19 April.

Manchester United
After stopping Manchester City winning the league against them in the Manchester derby, Jose Mourinho’s side handed it to Pep Guardiola’s team on a plate by losing 1-0 at home to relegation-bound West Brom. The big question is, which United side will we see on Saturday?

The side that beat the table-toppers on their own turf or the one that lost at home to the team at the bottom of the log?

The Red Devils need to make their quality count by claiming the FA Cup this season. United have lifted the cup 12 times and know that another victory this year would see them go level with Arsenal as the most successful side in the competition’s history.
United have the second-best defence in the Premier League this season, conceding 26 goals, one more than champions Manchester City. However, Mourinho’s side have kept only two clean sheets in their last eight games which is a concern.
Eric Bailly was rested against the Baggies last weekend and is set to return to the starting lineup. The Ivorian has been United’s most consistent performer at the heart of defence this season – in fact, five of United’s six league defeats have been with him out of the side.
The FA Cup represents United’s last chance to end the season with a trophy, but Mourinho said he would only pick players in form when he chooses the team to play Spurs.
“What is the criteria for a manager to choose a team?” he said. “I only know one criteria, is the way they play. It is the only way I can select players.
“Or do you want me to go for the price they cost, or their salary, or their beautiful face? The only way is to go with performance.”
According to reports, Paul Pogba, Alexis Sanchez, Juan Mata and Ander Herrera are the players under threat of being dropped.

Tottenham
Tottenham succumbed to a 3-1 loss at Wembley against newly-crowned Premier League champions Manchester City last weekend – their first league defeat in 2018. The performance was a disappointing one for Mauricio Pochettino’s side, though ultimately, a top-four place has been all but secured.
Spurs will be looking to bounce back strongly with Pochettino chasing his first trophy of his managerial career. Victory over United would mean the north Londoners progress to the FA Cup final for the first time since defeating Nottingham Forest 2-1 in 1991.
The Lilywhites have an unfair advantage as they play all their home league games at Wembley. When they faced United at the national stadium on January 31st, Pochettino’s side dominated from first whistle to last.
Pochettino will rely on Harry Kane to bag the goals and fire Spurs to the final. The England international has netted four goals in just three FA Cup appearances so far this term and has also hit 25 goals in his 32 Premier League games as well as seven goals in seven Champions League contests. It’s clear that Kane is a huge threat no matter who he is facing.
Verdict: Kane to Score Anytime & Tottenham Win (2/1)
Pochettino’s side have been superb at Wembley this season and have already beaten United at the national stadium, running out 2-0 winners.

With homeground advantage and the goal threat of Kane, my money’s on Spurs to win the tie in 90 minutes. Looking at Hollywoodbets’ Price Boosts and Specials, Kane to Score Anytime & Tottenham to Win looks a top bet.