Barcelona will host Atletico Madrid on Saturday in a highly-anticipated meeting between the last two league champions. The pressure is huge and the teams arrive at the clash at Camp Nou neck and neck. Atletico and Barca each have 48 points with just over half the season played but the champions, who have a game in hand, are ahead on goal difference. Real Madrid are four points adrift of the leaders in third.

The unstoppable attacking force against the most resolute defence in the league will provide a fantastic spectacle. 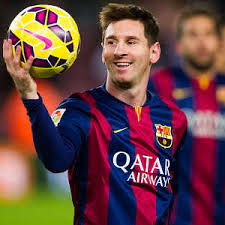 Barcelona
Barcelona leapfrogged Atletico Madrid to go top of La Liga after Lionel Messi’s acrobatic volley secured a hard-fought 2-1 victory against a tenacious Malaga last Saturday. The Catalans are unbeaten in 24 matches in all competitions with 19 victories, including six on the spin. In the league, they’ve won 15 of their 20 matches played, losing just twice against Celta Vigo and Sevilla. Both those defeats came away from home with Barcelona unscathed at the Camp Nou, winning 10 of 11 their games.In total, they’ve scored a remarkable 52 goals, while conceding just 16 times.

Luis Enrique has a star-studded squad and his attacking ranks remain frightening, and the individual qualities of Messi, Neymar and Luis Suarez are enough to win games single-handedly. Andres Iniesta will be the key player for Barca in midfield, starving opposition of the ball and creating goalscoring chances. His nimble feet enable him to skip away from defenders, while his vision allows him to pick penetrative passes from deep. The Spaniard brings creativity and invention—not to mention goal threat—to Enrique’s side, and he could be a nuisance for Diego Simeone’s men on Saturday.

Barca’s front three are on fire at the moment, and their movement has been first class. Given licence to roam, it’s not been uncommon to see any one of the three dropping deep to receive the ball, and either keeping the width down the channels or being more direct centrally. With all three keen to work in tandem, their freedom of expression and interplay is paying wonderful dividends.

Suarez is in spectacular form for the Catalans having scored 29 goals in his last 29 games. That is the best return of any striker in the top five leagues at present, and with a full week’s rest because of his Copa del Rey ban, the Uruguayan international will be looking to add to his tally.

World Player of the Year for a fifth time, Messi has the ability to glide past players at pace, with an unearthly control and a deadly eye for goal. He is the complete player and undoubtedly one of the most technically gifted players in world football. Atletico Madrid
Atletico Madrid missed the opportunity to go to the top of La Liga standings after their four-match winning league run was ended by a goalless draw against Sevilla last Sunday. Atletico moved level on points with Barcelona following the champions’ 2-1 win at Malaga last Saturday but remain second on goal difference. Colchoneros remain unbeaten in eight matches in all competitions with five wins, keeping seven clean sheets. However, the loss of Fernando Torres to injury along with Angel Correa and Felipe Luis to suspension is going to hit Atleti hard. With three players missing, the impetus and advantage is definitely with the hosts. If Simeone and his staff can pull a rabbit out of the hat here, they deserve every plaudit that will come their way.

There isn’t any doubt that Messi, Neymar and Suarez are the best front three that Barcelona have ever had. Perhaps it’s the best strikeforce in the history of football. So much focus and attention on Barca’s attacking trio neatly bypasses the fact that Atleti have some sterling strikers of their own. In Antoine Griezmann and Luciano Vietto, they’ve got two of the finest young players in Europe and the pair have struck up a sensational partnership this term.

The Frenchman, in particular, has become the subject of interest from all of European football’s big clubs, such has been the standards of excellence that he has set during the campaign. Griezmann has 12 goals and two assists this season and will be a menace to Enrique’s side. He will look to put Los Blancos to the sword with dazzling dribbles, close control and his trademark blistering pace. Griezmann is the most potent player in the Atletico squad in front of goal and is renowned for his ability to sneak past defenders and create space for himself. His mobile play and diagonal movement are a nightmare for defenders which makes it literally impossible to man-mark him.

Vietto isn’t quite up to Griezmann’s level just yet in goalscoring terms, but his movement and interplay is nothing short of sensational. Certainly Barca’s back line will need to be on their toes throughout the match to contain both players.

Verdict: Barcelona 5/10
The Catalans are unbeaten at home this season, winning 10 of their 11 games, scoring 38 goals while conceding seven times. Atleti have already lost twice away from home and with key players missing out, Barca should prove too strong. They are unbeaten in their last 13 games against Atletico with nine victories. For more value back Barcelona to Win + Under 3.5 at 21/20.