The first El Clasico of the season lived up to one side’s expectations last weekend as Barcelona produced an attacking masterclass to blow Real Madrid away at the Santiago Bernabeu. The Catalans are now six points clear at the top of La Liga following their 4-0 trouncing of Real Madrid. Barcelona will now look to maintain their excellent home form when they host Real Sociedad this weekend and will be boosted by the return to full fitness of Lionel Messi, having made his return in the Clasico. Rafael Benitez will be eager to move on from last weekend’s heavy defeat and will be hoping for a positive response from Real Madrid who travel to Eibar on Sunday. There are other exciting matchups in store this weekend with some enticing odds on offer. 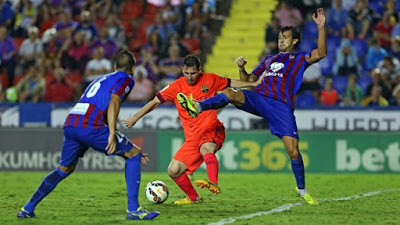 Levante 21/20
Draw 9/4
Betis 27/10
Brazilian striker Deyverson scored twice in Levante’s 3-0 win at Sporting Gijon to move the team off the bottom of table with their first win in three matches under new coach Joan Ferrer. Les Granotes will be hoping to build on that performance and pick up their third victory of the season. Pepe Mel’s side went down 1-0 to Atletico Madrid last weekend – their third defeat from their last five matches. Betis are unbeaten in their last four meetings against Levante with two wins. However, with home ground advantage, Levante are tipped to earn a point at 9/4.

Barcelona 1/14
Draw 10/1
Real Sociedad 27/1
Barcelona will be high on confidence following their 4-0 trouncing of arch-rivals Real Madrid in last weekend’s El Clasico. From the beginning to the end, the Catalans were superior to Los Blancos, who were ridiculed and booed by their own fans. The final result could have been more, as Luis Enrique’s side had chances to make it an even more scandalous scoreline. Barcelona are now four points clear at the summit and Argentine superstar Leo Messi has fully recovered from injury. Barca have won all six of their home matches, scoring 18 goals and have conceded just five times. New coach Eusebio Sacristan earned three points in his first game in charge as Real Sociedad beat Sevilla 2-0 to pick up their first home win of the season. Eusebio will now return to the Camp Nou to take on his former club, but the only thing he’s likely to get is a good reception from the Barcelona faithful. With the in-form duo of Luis Suarez and Neymar along with the return of Messi, this could be a massacre for La Real. Take Barcelona to Win By Three Or More Goals at 13/20.

Atletico Madrid 1/4
Draw 47/10
Espanyol 12/1
Atletico Madrid took advantage of Real Madrid’s humbling loss in the El Clasico by moving past their crosstown rivals into second place in the La Liga after winning 1-0 at Real Betis last Sunday. Rojiblancos are now unbeaten in their last six games with four wins including two on the bounce. Diego Simone’s men have lost just once at the Vicente Calderon this season (against Barcelona) and have won three of their last four matches. Espanyol moved into the top half of the Primera Division after beating Malaga 2-0 thanks to a first-half double from Hernan Perez. Espanyol have lost four of their last six matches on the road including their last two outings against Rayo Vallecano and Athletic Bilbao. Atleti have lost just once to Espanyol in their last seven meetings with five wins, keeping five clean sheets. Rojiblancos have also kept three consecutive clean sheets in all competitions. Back Atletico to win with a clean sheet at 9/20. Malaga 8/10
Draw 5/2
Granada 37/10
Malaga suffered their seventh defeat of the season as they went down 2-0 to Espanyol and bottom of the table. Javi Gracia’s side have now lost four of their last five games and will be hoping to make home advantage count when they host Granada this weekend. Los Boquerones have won two of their last three home matches against Real Sociedad and Deportivo La Coruna. Their opponents Granada claimed a much-needed first home win of the season, and their first victory in 10 rounds, to emerge from the relegation zone after downing Athletic Bilbao 2-0. Malaga have won all four of their home clashes with Granada, scoring 14 goals and conceding just twice. A tight affair is expected, but home advantage should see Malaga prevail at 8/10.

Las Palmas 13/10
Draw 21/10
Deportivo La Coruna 9/4
Las Palmas earned a commendable 1-1 draw against Valencia last time out, and they will be eager to build on that performance with a positive result here. Las Palmas overcame Real Sociedad 2-0 in their last home game and will be hoping home ground advantage will once again be the key factor as they battle Deportivo La Coruna. Victor Sanchez’s side have found wins hard to come by in recent weeks but haven’t exactly been easy to beat. Deportivo La Coruna have lost just once in their last eight matches with three wins including last weekend’s impressive 2-0 win over Celta Vigo. Deportivo are tipped on the Win/Draw Double at 11/20. 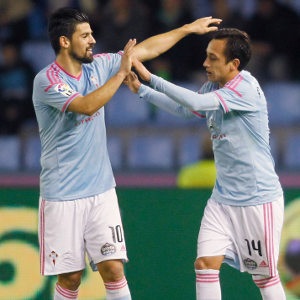 Celta Vigo 4/10
Draw 4/1
Sporting Gijon 6/1
Celta Vigo have struggled in recent weeks having lost three of their last four matches. Eduardo Berizzo’s side will be desperate to return to form against Sporting Gijon this weekend. The Sky Blues will look to the talented duo of Nolito and Iago Aspas to inspire them to victory. The pair have struggled for form in recent weeks, but if they’re up for it, then Celta Vigo have a good chance of returning to winning ways. Sporting Gijon suffered a 3-0 loss to Levante – their third defeat from their last five games. Celta Vigo should bounce back this weekend and claim maximum points against Gijon.

Getafe 23/10
Draw 9/4
Villarreal 5/4
Villarreal are without a win in their last two matches having lost 3-0 to Barcelona, followed by a 1-1 draw at home to Eibar last time out. The Yellow Submarine have struggled in recent weeks and have lost two of their last three away games. Coach Marcelino will be desperate to end his side’s winless run against Getafe this weekend, and will look to the attacking duo of Cedric Bakambu and Roberto Soldado to produce their best form. Fran Escriba’s men are struggling for form with three losses in their last four matches. Getafe earned a point against Rayo Vallecano last time out thanks to an own goal from defender Jozabed. The Deep Blues are yet to win a match on the road this season with five losses from six games. Villarreal are unbeaten in their last five meetings against Getafe with four wins. Back the away win at a valuable 5/4. Eibar 6/1
Draw 39/10
Real Madrid 4/10
Not since his half-season spell at Chelsea, will Rafa Benitez have felt more like an interim manager. After his side were thrashed 4-0 at home to Barcelona last weekend, the 55-year-old looks to be on borrowed time at the Bernabeu. Los Blancos have now lost two in a row and are currently third on the table behind Atletico Madrid and leaders Barcelona. Real Madrid’s last away game ended in a 3-2 defeat at Sevilla. Eibar are undefeated in their last three games with two wins followed by a 1-1 draw against Villarreal last time out. Los Blancos did the double over Eibar last season with 3-0 and 4-0 wins. Real Madrid will bounce back strongly and should be backed at 4/10.

Rayo Vallecano 19/10
Draw 5/2
Athletic Bilbao 13/10
Athletic Bilbao will be looking to recover from their shocking 2-0 defeat at Granada last weekend which saw the Basques drop down to ninth place in the table. Aymeric Laporte scored an own goal after just five minutes before Isaac Success made sure of the points by scoring on the volley just before the hour mark, ending Athletic’s five-game winning streak in all competitions. Coach Ernesto Valverde will demand better from his players this weekend, but will face a stern test against Rayo Vallecano. The Vallecans have won three of their last four home matches including two on the bounce against Espanyol and Granada. Rayo Vallecano managed a 2-1 win over Athletic Bilbao on their turf last season, but with the quality Bilbao possess this term, the draw is tipped at 5/2. Sevilla 15/20
Draw 29/10
Valencia 33/10
The match between Sevilla and Valencia should prove to be a thrilling encounter as both teams thrive on fast-pace attacking football. Los Rojiblancos are coming off a disappointing 2-0 loss at Real Sociedad, but the Europa League champions will be happy to be back on their turf. Sevilla have won four on the spin at home including notable wins against Barcelona and Real Madrid. Manager Unai Emery will be hoping his side bounce back from last weekend’s defeat and secure a vital win against a team they haven’t beaten in their last three attempts. Valencia have won two of those meetings against Sevilla, but their away form this season is a concern for coach Nuno Espirito Santo. Los Che have lost three of their last four away matches, but did beat Celta Vigo 5-1 in their last away match. Both Teams To Score looks a certainty at 6/10, but Sevilla look good for the win at 15/20.