The German international winger was taken off at half-time after a much-criticised challenge from Cardiff’s Joe Bennett.

Man City said on Monday that scans had confirmed the 22-year-old has suffered ligament damage, but they did not say how long he would be out for.

Bennett received a yellow card for the tackle and was later sent off after picking up another booking. 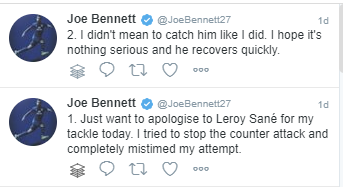 City boss Pep Guardiola called for more protection for players from referees after the game.

“The only thing they can do is that – protect the players, because then it would not happen again,” he said
“It happened once with Leroy, then it happened with Brahim again at the end.”

City won the match at Cardiff 2-0 to make the fifth round of the FA Cup thanks to goals from Kevin De Bruyne and Raheem Sterling.

Sane has scored 11 goals and produced 14 assists in all competitions this season.

Watch the Video Below:
NB* Not for sensitive viewers