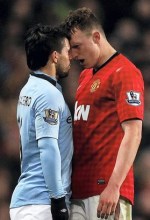 One of the biggest local derbies will take place in Manchester on Sunday. The Manchester derby has become one of the most high profile rivalries since Manchester City’s big money takeover in 2008. The Manchester teams are the last two clubs to win the Premier League, with Manchester City winning the title in the 2011/12 season and United being the current champions. Both have stuttered this season under new management and will want to win this important fixture, also to win over the fans in this early stage of the title race. World Cup final referee Howard Webb will take charge of this match. It will be the first time he has officiated at a Manchester derby since the 2010 Carling Cup semi-final second leg, when Wayne Rooney scored a last-minute winner to seal an aggregate victory for United. In the past, City fans have accused Webb of favouring United. Manchester City
Manuel Pellegrini and his big money signings haven’t enjoyed the start they would have wished for with two wins, a draw and a loss from their four league matches, sitting in fourth position so far. Having lost to Cardiff towards the end of last month, City could only manage a goalless draw away to Stoke last Saturday. On the back of quite a few players returning from international duty injured, an injury list that took out three of the back four, it was a difficult one against Stoke. Now it is the Manchester derby and it is all about wearing the badge of honour. Their home form has been impeccable with a 4-0 win against Newcastle in the opening match and a 2-0 win over Hull. The Citizens have received a huge boost following Vincent Kompany’s return from injury. The Belgian defender had been missing since the opening game of the season. But it seems City’s defensive crisis has eased considerably with the captain to join Matija Nastasic back in the match-day squad. City have looked far from assured defensively in recent weeks, and captain Kompany has also been a huge miss with his leadership skills. Wayne Rooney returned to give Manchester United manager David Moyes his maiden win at Old Trafford as the champions beat Crystal Palace 2-0 last weekend. Following an impressive 4-1 win in a potentially tricky season opener at Swansea, United were held 0-0 at home by Chelsea before slipping to a 1-0 defeat to Liverpool at Anfield. Rooney had missed United’s defeat at Liverpool and England’s World Cup qualifiers against Moldova and Ukraine after suffering a gashed head in a training ground collision with teammate Phil Jones. Wearing a black headband to protect the damaged area, Rooney marked his return to action with his first goal of the season in the 81st minute. Robin van Persie had struck from the spot to give United the lead in first-half stoppage-time after Palace’s South African midfielder Kagisho Dikgacoi was harshly sent off for fouling Ashley Young, who looked to have taken a dive. Moyes sent on Belgian midfielder Marouane Fellaini for his United debut in the 61st minute following his £27.5 million move from Everton on transfer deadline day. With Fellaini recently joining Moyes’ squad, the Manchester United boss has a horde of central midfield options for this match. Anderson is a likely starter after featuring against Palace last weekend, while Michael Carrick, Ryan Giggs, Tom Cleverley, Nani and Shinji Kagawa could all feature. Wayne Rooney and Robin van Persie are expected to pair in attack again.

VERDICT: Manchester City 11/10
The last time these teams met was in April in the league with City winning 2-1 at Old Trafford. Both sides haven’t been at their best. However, City are yet to concede at home having scored six goals in their two matches at the Etihad and are favoured to get the derby win because of that home ground advantage.