The MTN8 starts this weekend with Orlando Pirates taking on last year’s finalists SuperSport United. The MTN8 features the top eight teams from the previous season’s league standings competing on a knockout basis. The quarter-final pairs are chosen according to last season’s standings, so the champions play the eighth-placed team, the runners-up play the seventh-placed team, and so on. Pirates finished third and SuperSport sixth. Orlando Pirates
Orlando Pirates produced a stunning upset when they thumped Egyptian giants Al Ahly 3-0 in their CAF Champions League clash last Sunday. Pirates scored through Thandani Ntshumayelo, Andile Jali and Sifiso Myeni while goalkeeper Senzo Meyiwa saved a penalty. The match was not played at Al Ahly’s stadium but another stadium in Egypt because of the political unrest and security issues in the country. CAF also ordered the seven-time champions to play in an empty stadium because of crowd trouble earlier in the competition. While the rest of the PSL kicked off their league campaigns at the weekend, Pirates play AmaZulu this evening. Orlando Pirates captain Lucky Lekgwathi says their opening MTN8 match against SuperSport is all about revenge. The Pretoria team dumped Pirates out of the semi-finals of the competition last season before losing to Swallows in the final. Pirates failed to bank any silverware last season and finished third in the PSL standings, but just five points behind title winners Kaizer Chiefs. They have re-shaped their strike force with the signings of Kermit Erasmus and Lennox Bacela in a bid to score more goals. 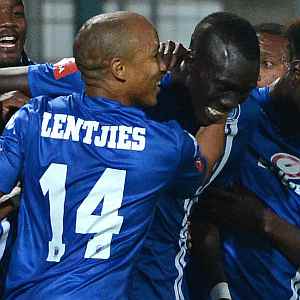 SuperSport United began their league campaign in style last weekend as they came from a goal down to defeat 10-man Free State Stars 4-1 at the Lucas Moripe Stadium in Pretoria. New striker Mame Niang was the star man for Matsatsantsa, scoring two goals and providing two assists in a man of the match performance. Stars were reduced to 10-men in the first half just after taking the lead. Defender Soriola Gege was sent off for a second bookable offence, elbowing Mame Niang in the penalty area. The striker converted the subsequent penalty to make it 1-1 at the break. Early in the second half, SuperSport went ahead for the first time when Bennett Chenene played a quick one-two with Niang before firing a left-footed shot from just outside the box into the bottom corner of the net to make it 2-1. United substitute Sameehg Doutie made it 3-1 in the 85th minute, volleying home a fine goal from Niang knocking-down a corner kick, and in injury time Niang himself completed a brace by winning a long ball to complete the scoring at 4-1. SuperSport finished in sixth place in the league last season after drawing 17 of their 30 matches and managing only eight victories. However the new coach has the firepower to turn those draws into wins with SuperSport making some excellent attacking signings in Thuso Phala, Bennett Chenene, David Mathebula and Mame Niang.

VERDICT: Orlando Pirates 27/20
Over the past two seasons Pirates have dominated SuperSport in league encounters, winning three out of four matches, and drawing one. Pirates are tipped to get their revenge from last season’s MTN8 and striker Kermit Erasmus should be at the forefront of a victory against his former team.