Kaizer Chiefs and Ajax Cape Town will contest the first South African trophy up for grabs on Saturday in the MTN8 Final. The match will take place in Port Elizabeth at the Nelson Mandela Bay Stadium.

The league champions will be defending their title after beating rivals Orlando Pirates 1-0 in last year’s final. For Ajax it’s a rare chance for them to add silverware to their bleak trophy cabinet that has just three cups with their last triumph coming seven years ago in the Telkom Knockout. Surprisingly, both experienced managers in Steve Komphela and Roger de Sa are yet to win the competition which rewards the victors with a huge R8 million in prize money. 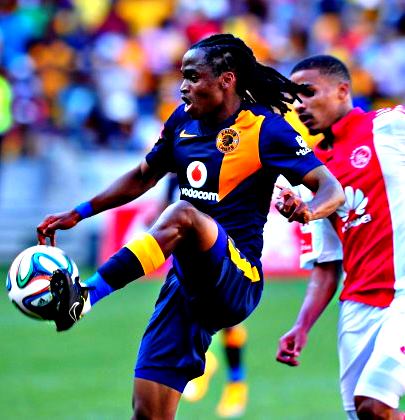 Kaizer Chiefs
Holders Kaizer Chiefs secured their place in the MTN8 final by ousting Bloemfontein Celtic 1-0 to proceed with a 2-1 aggregate win after drawing 1-1 in Bloemfontein. It was the in-form George Lebese who sealed the victory for Amakhosi, grabbing the sole goal just after the halftime break. Steve Komphela looks to be settling in at Amakhosi after their annihilation of SuperSport last weekend. Chiefs produced a four-goal barrage in the second half to beat SuperSport United 4-1 at Peter Mokaba Stadium, to move into third place on the league standings. The defending champions conceded after twenty minutes and until the interval did not look like pulling level. But the half-time chat from the coach did the trick as Lebese scored a brace and Reneilwe Letsholonyane reeled off a screamer to complete a rousing second half display. Siphiwe Tshabalala scored a penalty in injury time to confirm the annihilation of the Pretoria side.

With the win, the Glamour Boys moved to eight points from their four matches. Chiefs had defenders Tsepo Masilela and Eric Mathoho out injured, who were replaced by Keegan Ritchie and Lorenzo Gordinho. However, the defensive duo should return fit for this important clash. Bukenya came into defensive midfield for Willard Katsande, who was rested because one more booking would have meant a suspension from Saturday’s final. Lebese has been Kaizer Chiefs’ standout performer so far this season. The left-sided midfielder has five goals in all competitions, which sees him at the top of the goalscoring standings in both the league and MTN8. The 26 year-old is coming off his best season, where he was one of Amakhosi’s key players in their title winning campaign. He drives the team going forward and creates the most goalscoring chances as well as getting himself on the scoresheet when the opportunity presents itself.

Chiefs have fifteen top eight titles under their belt and have won the MTN8 four times since the year 2000. Their cup pedigree makes them clear favourites for this match. Upfront Siphelele Mthembu has been Komphela’s favourite to partner Bernard Parker and the target man has done an admirable job. However, new signing Camaldine Abraw made his debut in the 80th minute against SuperSport and would have given the coach a selection headache for the final. The highly-rated Togolese created Amakhosi’s last two goals – a clever pass for Lebese and then a penalty. Ajax Cape Town booked their spot in the MTN8 final with a 1-0 victory over ten-man Wits in their second-leg semi-final clash at Bidvest Stadium. Nathan Paulse slotted a 24th minute penalty – after Siyabonga Nhlapo was sent off for clattering Toriq Losper in the box – to give the Urban Warriors a 2-1 victory on aggregate. Ajax were awarded two penalties on the day, but Wits goalkeeper Moeneeb Josephs won the second duel by pulling off a save from Cecil Lolo’s attempt in the 86th minute. Ajax’s fifth place finish in the league last season meant they faced fourth placed Orlando Pirates in their quarter-final. The Urban Warriors stunned Pirates with a hard-fought 1-0 victory after Ndiviwe Mdabuka netted early into the second half with the Capetonians doing well to hold out for the win. The Urban Warriors are flying high at the moment as they lie top of the ABSA Premiership standings with nine points from four matches. They are coming off a 2-1 home win over Polokwane City at home last weekend, with Paulse and Abbubaker Mobara getting the goals. Their win extended an impressive home record that means the last side to win in the Mother City were Chiefs almost a year ago.

De Sa has accredited their good form so far to the fact that the club did most of their transfer business early on. Ajax signed midfielders Ruzaigh Gamildien and Ndiviwe Mdabuka, and last month’s Premiership Player of the Month, striker Prince Nxumalo, on pre-contracts, meaning they started training with the team on the first day of pre-season. The Urban Warriors have only reached the MTN8 final twice. They were runners-up on both occasions, famously losing the 2009 final 6-0 when they were hammered by Lamontville Golden Arrows. They also reached the 2000 spectacle, getting the silver medal after a 2-1 loss to Pirates. Ajax Cape Town’s centre-back pairing of Rivaldo Coetzee and Mobara have impressed. The 18 and 21-year-old are the league’s youngest central defensive combination and after starting eighteen league matches together last season, their combination this season has only gotten better. Both have benefitted from exposure in the national set-up. Coetzee is an established Bafana Bafana international with Africa Cup of Nations experience, and although Mobara is a defender by nature, he’s been used in a central midfielder role in the national Under-23 side’s Olympic qualifiers.

VERDICT: Draw 24/10
Chiefs have had the better of this fixture and have won the last three meetings between the sides without conceding. Ajax have only beaten Chiefs once out of Cape Town in thirteen attempts, and that was way back in 2007. Both sides have come into good form and I’m tipping Ajax to hold Chiefs to a draw in ninety minutes, with the defending champions to lift the cup only after normal time.