Bafana Bafana head into their second leg tie against Angola with a two-goal advantage after their brilliant performance in Benguela. Shakes Mashaba’s men were emphatic in the way they dispatched their northern neighbours last Friday. While many fans are declaring the tie all but won, the Bafana mentor has warned his charges to expect a backlash from the Palancas Negras. 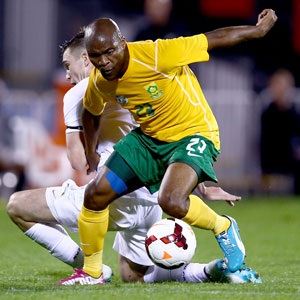 South Africa
Having conceded the first goal with less than two minutes having been played, fans around South Africa were thinking their heroes would once again falter during a qualifying campaign. Shake’s men had other ideas, however.

Bournemouth striker Tokelo Rantie levelled the scores on the 14-minute mark with a superb curling effort from the top of the box. Six minutes later, Orlando Pirates hitman, Thamsanqa Gabuza, gave the visitors the advantage. A lightning quick counter attack ended with the ball being played through to Gabuza. The 28-year old didn’t bother with taking a touch, instead lashing the ball into the far side of the goal with a first-time finish. There was to be further misery heaped upon the hosts, with Andile Jali converting a penalty in the latter stages of the second half.

Jali’s game was to have an unhappy ending however, with the Pirates midfielder picking up a soft red card which means he will now miss the clash in Durban.

The South Africans are well and truly in the driving seat. Their opponents have to score three and keep a clean sheet to be in with a shout of causing one of the biggest upsets in African football history. 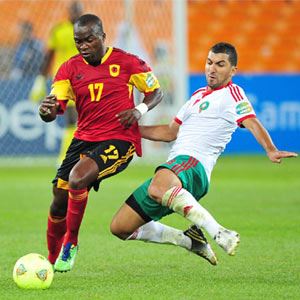 Angola
There will have been a few harsh words floating around the Angolan dressing room after last Friday’s showing. Most of the verbal abuse would have been aimed at the back four – who went missing for all three of South Africa’s goals. While scoring three goals and keeping a clean sheet away from home is a tough task for even the most well organised of football teams, it is going to be near on impossible for this ragtag Angolan side.

They will need star man Gerson to put in a Lionel Messi-esque performance if they have any chance of turning things around in Durban. The Angolan winger managed to grab the opener for his side and was a constant threat last time out.

It will be interesting to see how Romeu Filmon sets up his side. He may be forced into implementing a 3-4-3 system as his side have to attack. If he does opt to use this system it may well come back to haunt him as his charges are bound to leave a lot of space at the back for the South Africans to manipulate on the counter.

Verdict: Over 2.5 Goals at 27/20
With the Angolans searching for goals and the South Africans lethal on the counter, this game could turn out to be a goal fest.