With the Africa Cup of Nations to be held in Equatorial Guinea fast approaching, Bafana Bafana will play Zambia in a warm-up game before heading to camp in Gabon. The farewell match will be played at Orlando Stadium where Bafana will also have a chance to display their newly designed Nike kit which will be used for the showpiece, set for 17 January to 8 February. South Africa
The president of the South African Football Association, Danny Jordaan, expressed his gratitude to head coach Shakes Mashaba who will be making his first appearance in Johannesburg with the current Bafana squad and sent out a message to the nation. “This is an opportunity for all South Africans to come in numbers and say thank you to Mashaba and his boys for qualifying for AFCON 2015. The boys are set to make us proud in Equatorial Guinea. Over and above that, it’s a perfect opportunity for the coach to present to the nation the final squad that will fly South Africa’s flag high at the AFCON tournament,” said Dr Danny Jordaan. “This is a chance not to be missed, and we urge the fans to come in numbers to show their support to Bafana Bafana as they leave these shores to represent us at the biggest continental soccer showpiece. That is why we have even dropped our ticket prices to make this a day to remember for all.” Tickets for the match are on sale for R50 and can be purchased at Computicket outlets and Shoprite/Checkers stores.

The clash will also give the fans a chance to see South Africa’s final 23-man squad trimmed down from 34 players as it would have been announced four days earlier (30 December 2014). The coach faces a headache of cutting players from the squad as most of them have all featured in helping Bafana qualify for the tournament. On announcing the provisional 34-man squad, last week, Mashaba was at pains to stress that it was not cast in stone. Players left out still had an opportunity as he continued to mull over his options. Now reports suggest that Mashaba may have a few tweaks in mind before he releases his final squad. One name that has been highlighted has been Kaizer Chiefs goalkeeper Itumeleng Khune. Khune, once the captain and regular number one of Bafana, has been out injured for three months. He is back, fit and ready and looking at the four goalkeepers in the provisional squad – Darren Keet (KV Kortrijk, Belgium), Brilliant Khuzwayo, (Kaizer Chiefs), Jackson Mabokgwane (Mpumalanga Black Aces) and Siyabonga Mpontshane (Platinum Stars) – reveals a lack of international experience. Mpontshane, in fact, is not even a regular at his club. Khune’s wealth of experience, charisma and leadership ability would be a strong shoulder to lean on, even if he is just a squad member. Bafana have been drawn in the ‘Group of Death’ for the AFCON alongside Ghana, Algeria and Senegal. 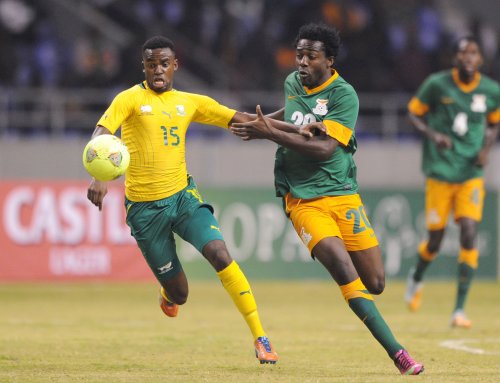 Zambia coach Honor Janza has combined youth and experience in his 27-man provisional AFCON squad. The squad, which will be whittled to 23 players by January 10, started their training camp in Johannesburg from 26 December. Chipolopolo have been drawn in Group B together with Cape Verde, the Democratic Republic of Congo and Tunisia. Janza has named twelve players who were at the 2013 AFCON in South Africa and eleven from the 2012 AFCON winning squad. Zambia qualified for the finals by finishing second in their group of four behind Cape Verde. After failing to win their opening three matches, Chipolopolo went on to earn three victories without conceding a single goal.

VERDICT: South Africa 8/10
Bafana are yet to lose a match under Mashaba, having won four games and drawn three. They qualified top of a group that was much stronger than Zambia’s, beating Nigeria, Congo and Sudan. Even though they might be without their foreign contingent, who could possibly only arrive for duty on Sunday, the local based team have already proved themselves beating Ivory Coast 2-0 in the Nelson Mandela Challenge last month. Zambia have somewhat fallen off their pedestal since winning the AFCON in 2012 and South Africa should dominate this match and are tipped for the victory.